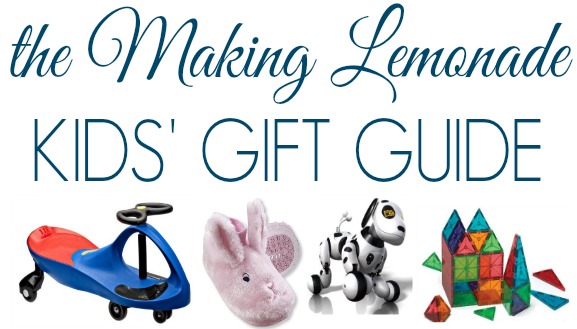 Believe it or not, I’ve been working on the Making Lemonade Kids’ Gift Guide for months– testing, researching, planning, and buying to provide you with the most comprehensive guide for kids’ gift ideas possible.  Because it’s what I know best, I’ve geared this guide towards kids aged 3-7; a wide range that includes preschoolers through early elementary aged kids.  As a former elementary teacher, I have strict standards for what constitutes a great toy.  As a mom to a 3 and 5 year old, however, my ‘strict standards’ also now include the FUN factor and making note of which toys my kids beg to use and keep them occupied for extended periods of time.  Somewhere at the corner of AWESOME and EDUCATIONAL you’ll find the following toys– Making Lemonade approved, of course! 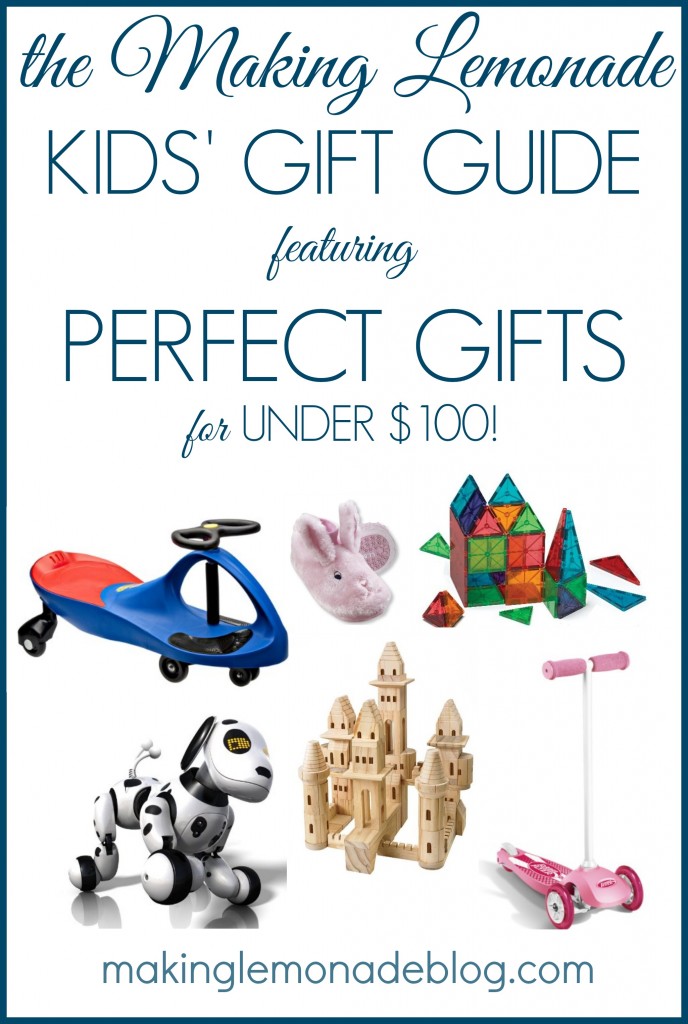 A few notes about the guide:  Please note that a few of these toys were provided free of charge without promise of review or promotion.  Those items are denoted with a *.  None of these toys are included in exchange for money from the manufacturer.  All opinions are 100% my own, and I’ve included affiliate links where you can read the customer reviews and get additional information on each product– I’ve made sure ALL of the products are highly rated on the websites.  Also, I categorized them by price but since prices vary widely this time of year they may have fluctuated after I put them on the list.  Enough mumbo jumbo, enjoy!

Before you read any further, I must recommend my absolutely most favorite tool in my entire home– the Open-It Scissors and Utility Tool.  These were an absolute LIFESAVER last year.  They cut right through those awful and sharp hard plastic packages around every toy.  It has a mini-screwdriver for battery compartments, and a utility knife in the handle for cutting off tags.  If you buy nothing else on this gift guide, let it be the Open-It so you can spare your hands and any trips to the emergency room!  You’re welcome.  Happy Holidays. 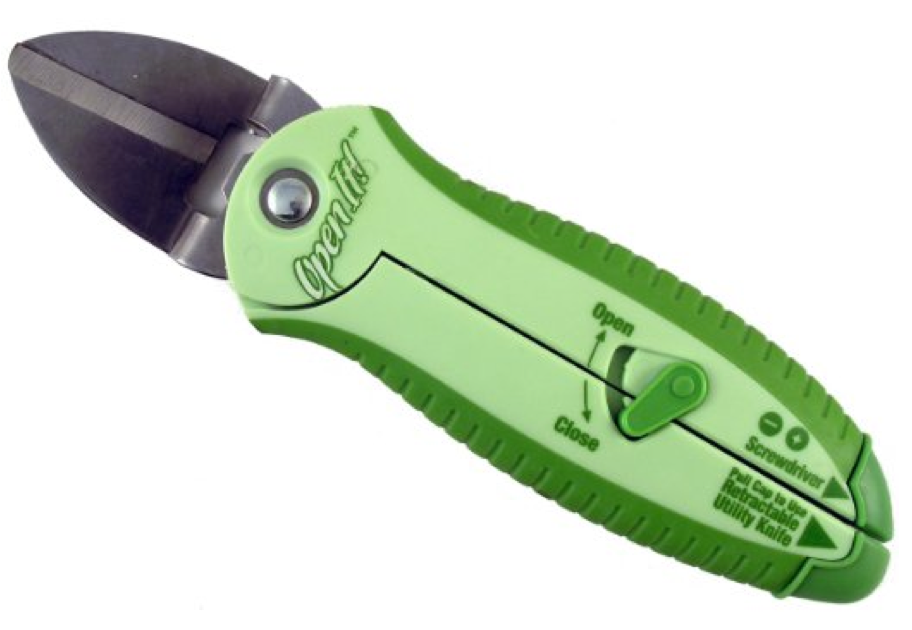 Gifts for Preschoolers Under $15 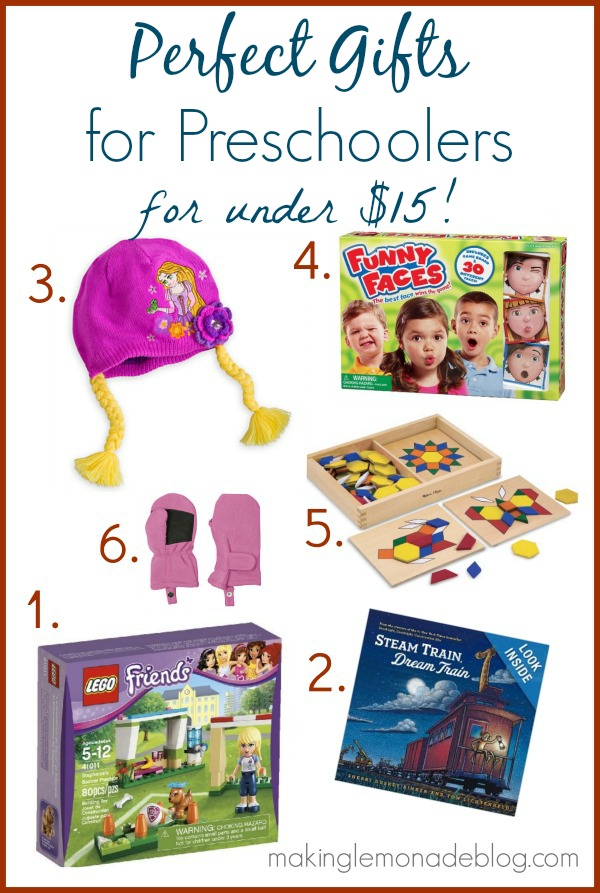 From the same author of Goodnight, Goodnight Construction Site comes this train filled version.  My son is going to Flip. Out. when he sees this in his stocking!

What do you get the Rapunzel obsessed child?  A Rapunzel Braid Winter Hat, of course!  Fo’ real, how cute is that?!  Go through Ebates and currently get cash back, too.  That adds up if you’re doing a little Disney Store shopping.

This game is so cute!  It’s also a great learning tool for teaching kids to notice subtle changes in facial expressions or start discussions on connecting emotions with expressions.  As a teacher, I’d recommend this as a helpful game for children on the autism spectrum.  As a mom to a special needs child myself, I simply love the interaction and making funny faces with my kids.

Even though it’s a teeny bit more on Amazon I placed this on the ‘under $15’ gift list because I found a set for $12.99 at HomeGoods.  😉  A fantastic toy for fine motor skills, spacial awareness, and keeping kids busy for awhile!

The teachers at preschool specifically asked us to send in mittens and not gloves, so these highly rated easy-on mittens from One Step Ahead are going in their stockings for sure.

Gifts for Preschoolers Under $30 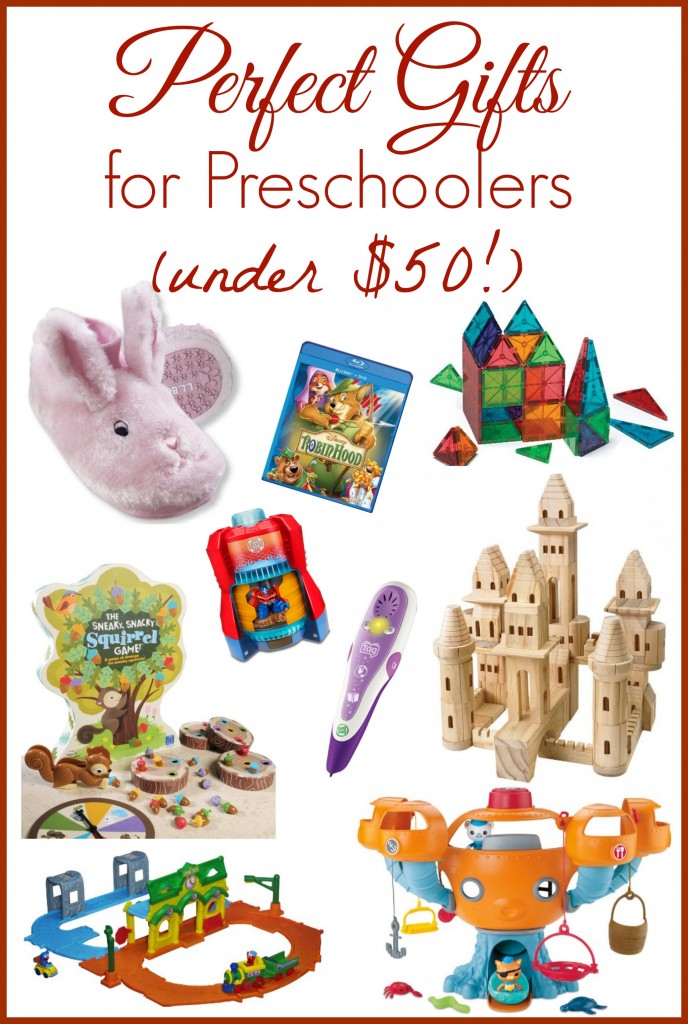 Creature Report!  Creature Report!  {creature report!}  This creative playset allows fans of the Octonauts to use their imaginations with several activities and pieces with which to play.  My son saw a photo of the Octopod set and has been begging for it ever since.

I bought these for my daughter for Christmas and the sneaky girl found them and put them on immediately– she loves them so much she often refuses to take them off at bedtime!  I thought they may be clunky to wear but she walks in them just fine.  They have non-slip soles and stay on beautifully.  LL Bean makes just about the best all around slippers for kids, we also love the Toddler Fleece Slippers for the same reasons mentioned above.   Go through Ebates and get cash back, too-  hooray!

My son spotted this at a toy store in September and it was the FIRST thing he asked for on his Christmas list.  If you have a preschooler that’s obsessed with trains (holla!) and/or Sesame Street, then they’ll enjoy this set.  If they love both those things, they may just explode with happiness when they unwrap this gift.

We received this as a gift last year and it’s just about the cutest thing out there AND easy for even a 3-year-old to play.  An ACTIVE 3-year-old, with the attention span of, well, a squirrel.

Eeep!  This childhood favorite of mine is finally out of the Disney Vault!  Robin Hood, Maid Marian and crew are all back and dancing in this classic Disney film.  Can’t wait to share it with the kids.

Gifts for Preschoolers Under $50

I was able to preview this at a recent Mom Mixer, and it’s pretty cool first game system.  Your child chooses a transformer, inserts him into the ‘Beam Box’, and he appears on the screen.  It has a wireless controller and connects right to your television.  We haven’t had a chance to play with it yet, but it’s going to be sitting under the tree on Christmas morning for sure!

I’ve heard nothing but rave reviews about Magnatiles!  The downside is they are pricey.  The 32 piece set is about $50 and the 100 piece set can be over $100.  However, I heard splurging for the 100 piece set is the way to go because you can build so much with it, and it keeps kids occupied for hours.  Keep in mind it does contain magnets so you’ll want to supervise closely and not allow children under 3 to use it.

LOVE. Love, love, love the TAG pen.  My daughter spends hours using it to help her read books, work on comprehension, and just have fun with the TAG books.  Plus, the books are usually about highly desirable characters and movies such as Toy Story, Nemo, Cars, and all the princesses.  This is a superb educational item that my kids love!

This was just a whisker over $30 which is a great price for a wood set of building blocks– and castle shaped, too!  Your prince or princess will love constructing castles, slaying dragons, and dreaming of designing their future palace– okay, maybe that’s just me.

Gifts for Preschoolers Under $100 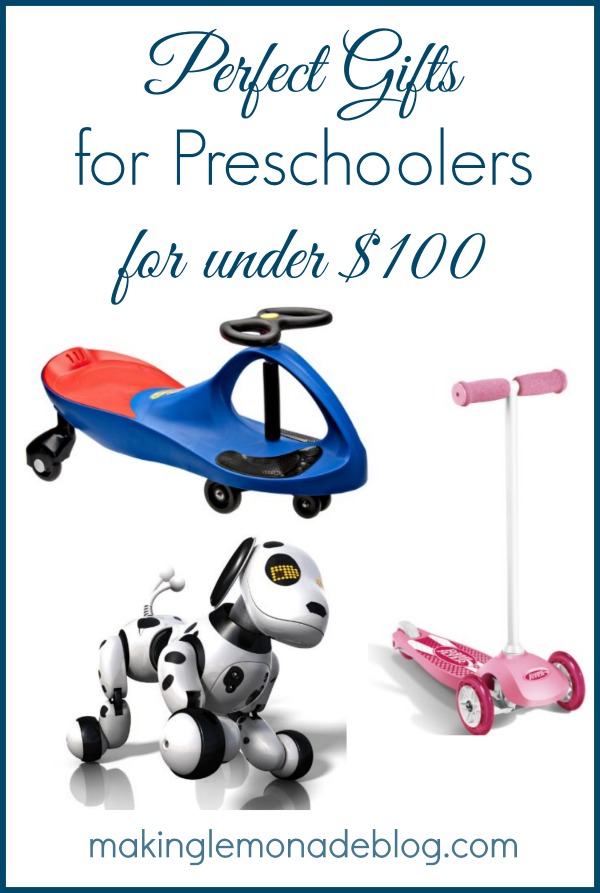 The PlasmaCar is another hot toy this year.  Since my daughter is getting a scooter I thought I’d best get something on wheels for my son too, and this came highly rated.  I can just see him zooming around the driveway come spring, and probably around the kitchen during the winter.  Sigh.

My daughter never asks for anything material, so when she very specifically told Santa she wanted ‘Zoomer the Dog’ I was floored.  He’s the ‘IT’ toy of the season, named a Walmart Top-20 Chosen by Kids toy and on just about every toy store’s top lists.  When I first added him to this list he was priced at well under $100 but now he’s getting really hard to find so expect to may more, unfortunately, unless Santa and his elves step up production.

My daughter’s physical therapist recommended a scooter to increase leg and core strength, so Santa’s going to deliver!  I ordered it last week.  😉 The Razor scooters look good too, but I liked that the Pro Glider’s footboard is wider and it seems easy to control.

Here’s a clickable slideshow of many of the recommended preschooler toys with ratings and prices:

What’s on your gift list this year?   Any great toys for preschoolers or early elementary aged kids to recommend?  Did any of your faves make the list?

Perfect Gifts for Preschoolers is linking up with: The Mommy Club

Best Gift Ideas for Him (Holiday Gift Guide for Guys) 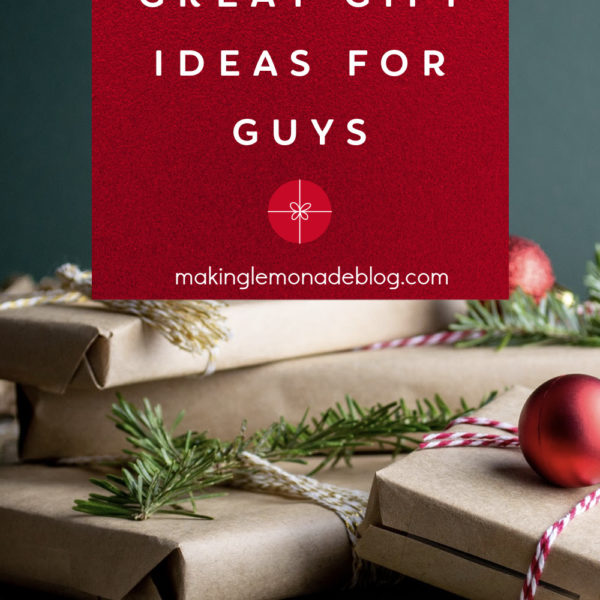 Gift Guide: The Best Gift Ideas for Kids and Teens 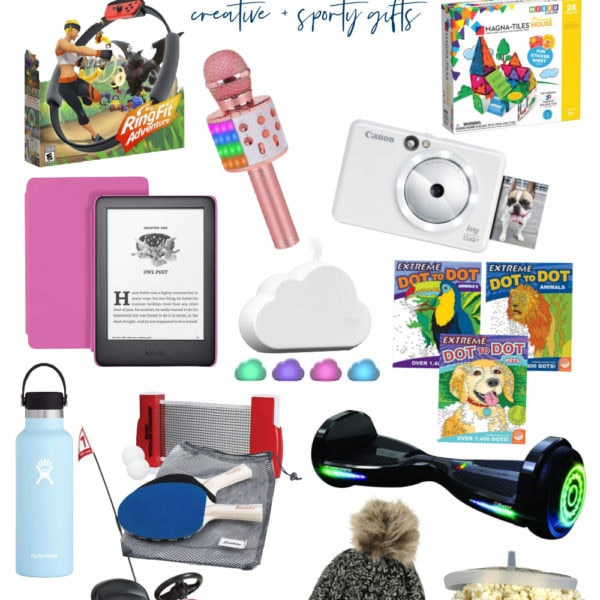 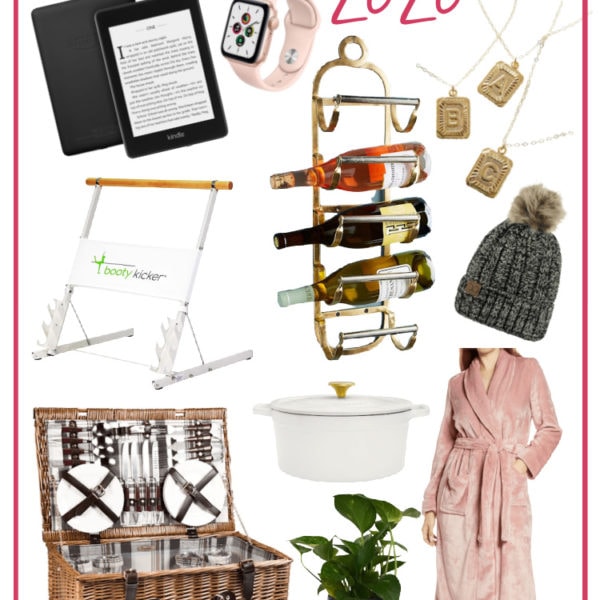