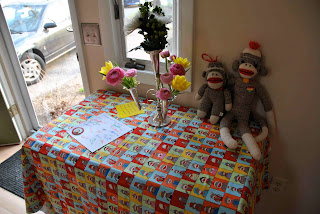 Jenny is BACK with the follow-up to her previous baby shower post.  And I must say, what a CUTE theme… pulled off quite beautifully, too!  I know you’ll welcome her back with open arms and swoon at the sock-monkey madness.  😉

As promised long ago, I was a good little guest blogger at the sock monkey shower last month and managed to snap a few pics to show off how the theme came together in the end. It was a co-ed shower, so we were aiming for cute while trying to avoid going over-the-top, and I’m really happy with where we landed! Here is a picture of the cupcake tower with the toppers. (We were able to borrow an antique silver tower that had a vase at the top for flowers–a classy touch!) 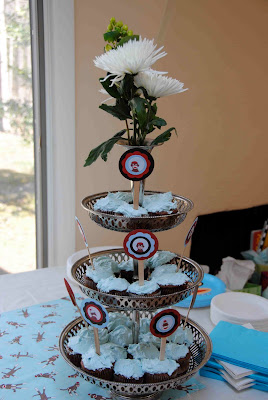 And here it is on the food table. Note the little runner of monkey fabric in the center, as well as the three-foot loaf of bread. Those things come from a local bakery here and cost FOUR DOLLARS. Crazytown. 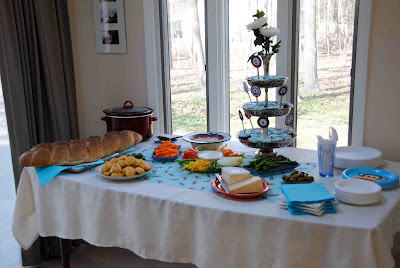 It turned out that one of the guests had been an avid sock-monkey collector in her childhood, so she brought a chunk of her collection for us to strew about the house. Here are two of them on the welcome table (again, covered in sock monkey fabric). You’ll also see an antique silver vase to match the cupcake tower and a guest sign-in sheet (a page from the scrapbook we made her that I’ll show you in a minute). 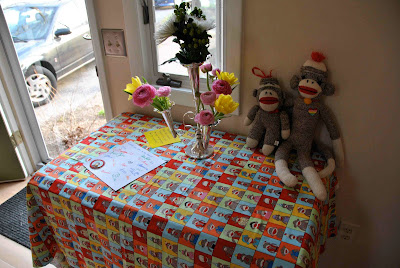 On another table we had more flowers and the very special sock monkey gift for the baby-to-be. This guy came from this woman’s Etsy shop and really, was worth every penny. He’s every bit as adorable and well-made in real life as he appears in the photo! 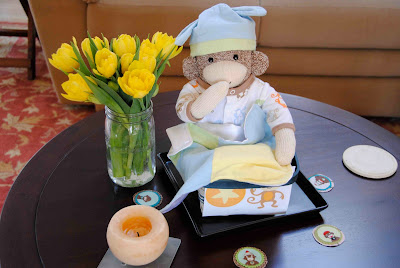 I surprised myself by crafting two decorative touches all on my very own (encouraged by the oh-so-easy applique lesson from this very blog not long ago!). The first was this banner that couldn’t have come out better if I’d hired a qualified craftsman/woman to do it. Note in the close-up that the words/border are made from the monkey-themed fabrics you saw earlier! 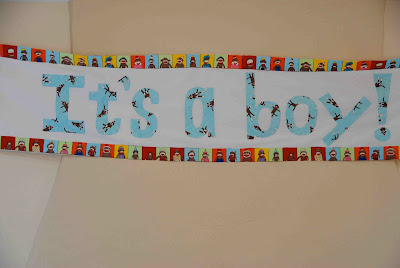 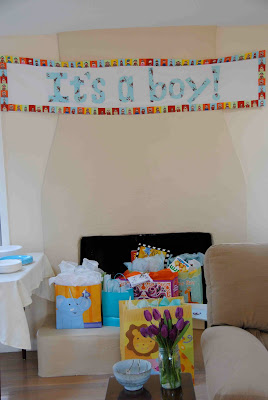 The second touch was a scrapbook that we filled with personalized pages we created at the shower. I had originally used the Etsy alchemy feature to find someone to make the scrapbook cover, but she ended up bailing on me, which I think was a good thing because one bone I have to pick with many of the scrapbookers on Etsy is it seems many of them have not heard of that phrase “less is more.” Even though about 15 people put in bids, it was nearly impossible to find someone whose samples didn’t look like they had been dipped in glue and then rolled through every aisle of A.C. Moore before getting topped off with ribbon-bindings reminiscent of a bad 80’s perm. In the end, I was kind of glad I got to throw together my own minimalist cover at the last minute. It fit the boyish theme of the party well, and also the un-frilly personality of the mom-of-honor. (And I got to put more of my no-sew adhesive to work. I am an official addict of that stuff now!!) Don’t mind the rows of “roundies” in the pic–they were just so cute I couldn’t stop myself from playing with them as much as possible. 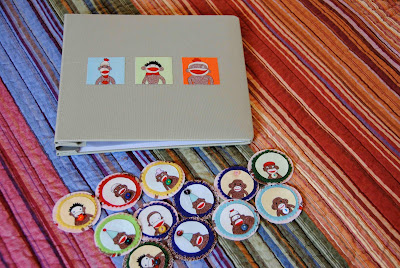 And here’s a picture of some our guests getting their craft on at the work station. 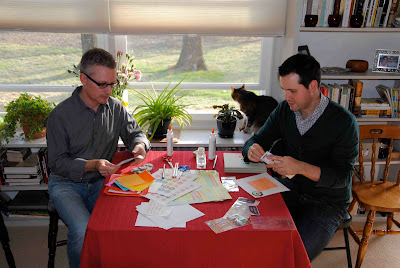 I am not a big “game” person, but we did have two activities. We played baby-themed charades (volunteer-only so as not to stress any guests out) and discovered that TLC is a GOLDMINE for that game. “I Didn’t Know I Was Pregnant” and “19 Kids and Counting” were some of the biggest crowd-pleasers (those and “the alien baby from Alien”, of course). Our second activity was more of a sentimental kind of thing that I saw at another friend’s shower. Everyone got to draw an envelope with a number on it and then write a card to the baby that he will get to open on his corresponding birthday. (I know, sniffle sniffle, aw!) It provided a cozy, reflective moment for the group and of course the added benefit of pressuring current friends to remain so in order to avoid an awkward 12th birthday when baby boy opens up a card from “that crazy cousin we don’t talk to anymore.” Hee hee. Here are the cards with little monkey stamps on them to fit the theme. 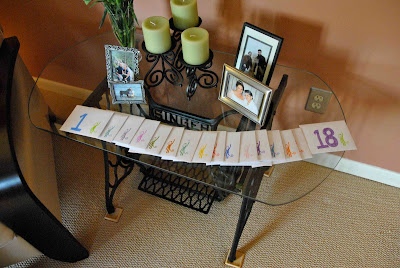 And last but not least, I have to include the picture of the most impressive, crafty, and theme-appropriate gift of the day–a sock monkey diaper cake! I swore there would be no diaper cakes involved in this shower, but I’m kind of glad one showed up anyway. It was pretty spectacular! 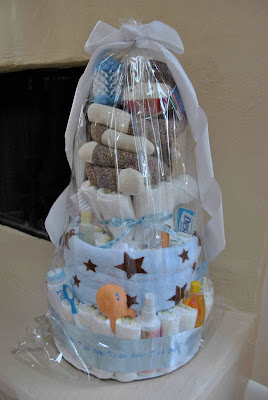 Confession:  I peeked at the photos before reading the post and that mammoth loaf of bread caught my eye immediately!  $4 bucks?  I’m moving closer to that bakery!  Jenny, thanks for sharing your fabulous ideas.  I love that the guys were in on the craftiness, and your Etsy finds were amazing.  I’m also super-impressed with your banner!  Will you make one for Noodle’s birthday?  Or show me how?  Sock monkeys are such a brilliant theme and I bet you’ll spawn quite a few more showers from this post!
Share This Post With Friends!

← Thrifty Retail Therapy: What should I do with this???
WINNER– Vera Bradley giveaway →