Jenny is BACK for another installment of her amazing and unique ideas for baby (you met Jenny when she showed us her fabulous Pigeon nursery).  We taught at the same inner-city school working 60+ hours a week, yet Jenny came across as calm and serene whereas I was a ball of stress.  I’m convinced I need more of Jenny in my personality.  Here she details two baby showers she planned this season, both of which totally ROCK and yet are easy enough to pull off calmly.  And serenely.  I’m learning, Jenny, I’m learning.

Have you ever had ALL your friends give birth within 3 months of each other?

Lucky for me, I have! Well, more accurately, I will have soon enough. One down as of last Friday (he missed sharing my own Olive’s birthday by 23 minutes!), and two to go (Carrie included!)–and every last one of them a boy this time around. Olive will have her pick someday!

I am excited about these babies for many obvious reasons, but one particular reason is that I feel I am finally in a position to help welcome these little loveys properly into the world. One thing (of many) that I absolutely could not stand about my life back when I was still a 60+ hour per week inner-city teacher was how it had turned me into a really lame friend. Now that I’ve downgraded professionally to a mindless administrative half-time job, however, I am ready to MAKE SOME STUFF HAPPEN for my friends and their little ones–woot! (But remember I am still half-time, which explains why I had to farm out a lot of the work you’ll see below to Etsy laborers. THANK YOU TALENTED ETSY CRAFTS-PEOPLE!)

My first friend to have a baby this winter/spring was having her second child, so it wasn’t really appropriate to throw her a shower. Instead, I threw her a “Ladies Afternoon” where I invited a small group of her best friends/favorite family members (we had 11 total) and we ate fancy food and all brought her a dish for her freezer in lieu of a gift. Because my house was not convenient to most of the people who attended, I asked a nearby family member of hers to co-host with me.

I did not have the foresight to take a picture of the table laden with delicious snacks, but it was quite a lovely ‘scape through no effort of my own–my co-hostess had put a beautiful white antique lace tablecloth out and then we used all clear-glass/crystal serving platters and dishes. It was in her sun room right next to a big row of windows so everything had a nice late-afternoon sparkle to it. Clean and simple and showed off the food beautifully!

This recipe was the absolute favorite of the day (and again, no picture–I’m the WORST!–really, I don’t know how Carrie let me onto this blog). I can’t take credit for it–I discovered it at my own shower and demanded the hostess of that shower pass it on to me. It is a true winner–easy as anything to make, beautiful to look at, fresh and healthy(ish), and just heavenly tasting!

As for the piles of frozen goods that my friend received…luckily it was nice and chilly outside so we put a big cooler out back where everyone deposited their dishes upon arriving. At the end of the day we just loaded the cooler right into my friend’s car. Really, I can’t tell you how envious I was of her haul. It was enough to feed them for a month! 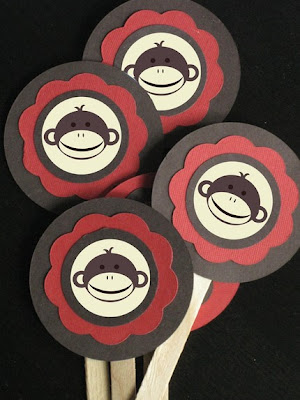 My next friend’s due date is sometime in April. She is very dear to us in my friend circle and this baby feels extra-special because he took his time getting made, so we’re really trying to pull out all the stops–while also keeping it simple, of course, since that is my alleged mission in life.

The first simple thing I did was go with an Evite invitation. And I’m so glad I did because their sock-monkey design was just the inspiration I needed for a theme (yes, I realize it is kind of lame to get inspired by an Evite template, but can I help it if that sock monkey was just the cute-but-not-too-cutesy, popular-enough-to-have-lots-of-options-on-Etsy-while-not-being-too-commercial idea I had been searching for?).

After a good deal of Etsy-browsing and countless exclamations of “OH. Now that is TOO CUTE.”, I settled on the following purchases to help me lay the monkey-groundwork:

Cupcake toppers made by Oh My Gluestick ($12 for the set of eight) seen above and below (I purchased the style below): 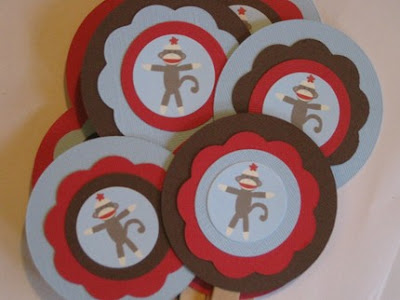 A whole bunch of all-purpose “roundies” made by Whimsical Paper Dot ($3.50 per set of five) for tagging gifts and making napkin-rings (I bought sets with blue/green/purple borders since we’re welcoming a boy): 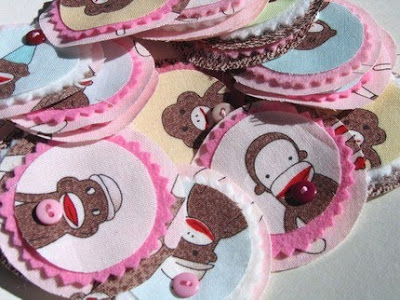 And this sock monkey .pdf file from ReviDevi ($4 per file) for printing as I please: 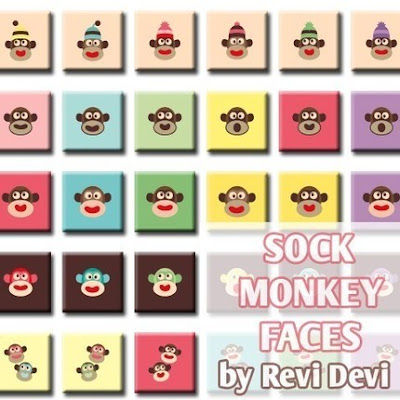 I plan to use the printouts as part of a craft basket that guests can use to decorate and personalize pages of a scrapbook for the baby. (By the way, this idea I shamelessly STOLE from Carrie’s very own lovelier-than-lovely shower!) I’m using Etsy’s alchemy tool to get a scrapbook made for me with a sock monkey theme on the front.

All-told, I feel like that’s a lot of sock-monkey bang for my 50 bucks (assuming I pay about $20 for the scrapbook). Buying the supplies for all those projects myself wouldn’t cost me much less (since my “craft” drawer has one giant bottle of glue and nothing else in it right now) and certainly would take me hours of time I don’t have!

As for the shower’s pièce de résistance, it serendipitously turns out that one of the guests has an obsession with sock monkeys and is going to bring a chunk of her large collection for us to use to decorate the gift and drink tables! We’re also going to to give the baby one special sock monkey of his own from friends and one from his grandmother-to-be, so those two will probably be placed prominently somewhere special–perhaps on the top of a diaper tower? I also might buy a few yards of that popular sock monkey fabric to incorporate into some of the table coverings.

This shower is happening at the end of March, so I promise this time I will be a good little guest-blogger and take a lot of pictures to send Carrie for a photo-update after it’s finished. I’m sure in the next month I’ll be adding many more monkey-touches, so I’d love for you to see the final product!

Baby-Welcoming Event #3: Redacted  Nice try, Carrie! I’m not fessing up anything about what might or might not be in store for YOU when you return home this spring. xoxo!

Jenny, I’m taking you up on the “what might NOT be in store” part of that sentence.  I’m blessed to have the most amazing friends in the world who have already gone above and beyond for me– I’ve taken more than my share!  And to think I still have Olive’s birthday present here, unsent, a week after her birthday.  Just promise we can drink Bellinis together on the deck once this baby is born; that would be the best baby gift.  Thanks again for your amazing ideas!