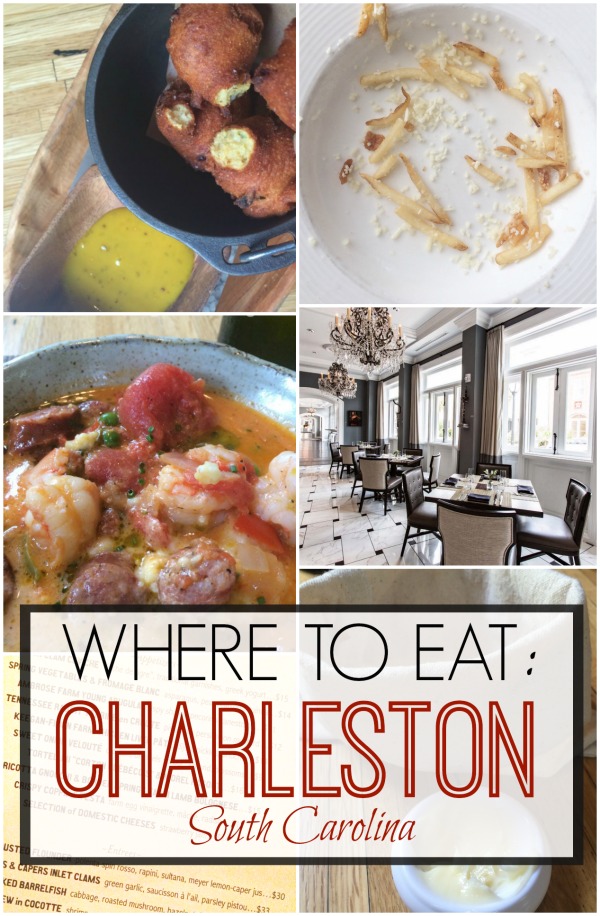 There’s plenty to love about Charleston, South Carolina– the history, the shopping, and the sightseeing to name a few. But let’s be real, the reason I fell in love with this city that adores bacon and smells like pralines is THE FOOD. Charleston is an eating (and drinking) city, a place where it’s best to pack your ‘pancake eating pants’ because you may leave with a little extra baggage then when you arrived. In a city with so many dining choices, finding the best restaurants can be overwhelming– so much to LOVE! so many RAVE REVIEWS! With that in mind, it’s good to scout out the places you must visit and make reservations when you can, so you don’t miss out on the best eating & dining that Charleston has to offer… while leaving some room to stumble upon hidden gems along the way.

As we recently discovered, it’s also helpful to have a friend that plays ‘Julie the Cruise Director’ when you plan your trip. In this case, it’s my friend Bonni– the ultimate organizer and motivator. Weeks before we visited Charleston she had our reservations done and itinerary planned, and it was a VERY GOOD THING, because we happened to be there on the busiest weekend of the year when over 40,000 people were running the Cooper River Bridge Run and a huge cruise ship was docked as well. Despite what could have been a crowded disaster, we ate and drank our way through the city with glee and didn’t notice the crowds one bit!

Four blondes walk into a bar… 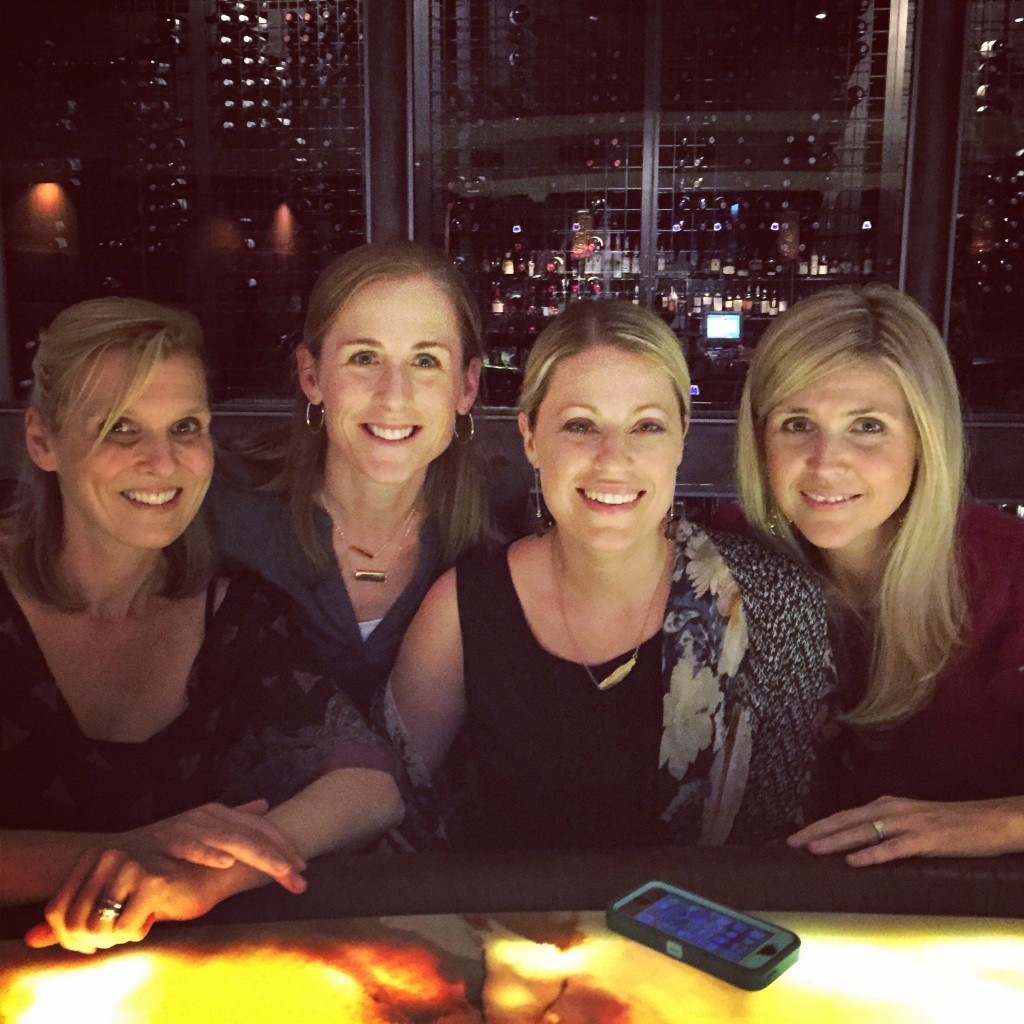 Here’s where we ate, drank, told secrets, and got a little rowdy… well, rowdy for us anyways.  When we go together, we do a lot of sharing– it’s sort of like a community table for our crew– which is honestly my favorite way to eat because you enjoy tastes of everything without getting stuffed. Oh Charleston (and my girls), I love you so!

Rooftop at the Vendue

The Rooftop has been voted the best Rooftop in Charleston since 2007, and it’s easy to see why. We love this spot! We stopped by on our first night for drinks and appetizers while we waited for our late reservation at FIG. It was a chilly night (too chilly for us even with the heaters) so we sat in the tented area. I stepped out for a moment to enjoy the view though, with the city’s steeples lit up all around. We tried a drink we didn’t like too much (a Caipirinha) but I’m sure it’s an acquired taste– and, ahem, Nic and I might have polished them off regardless. Even so, we always love being here and in warmer temps it’s THE place to be. Visit The Rooftop for the view, atmosphere, and plentiful drinks! 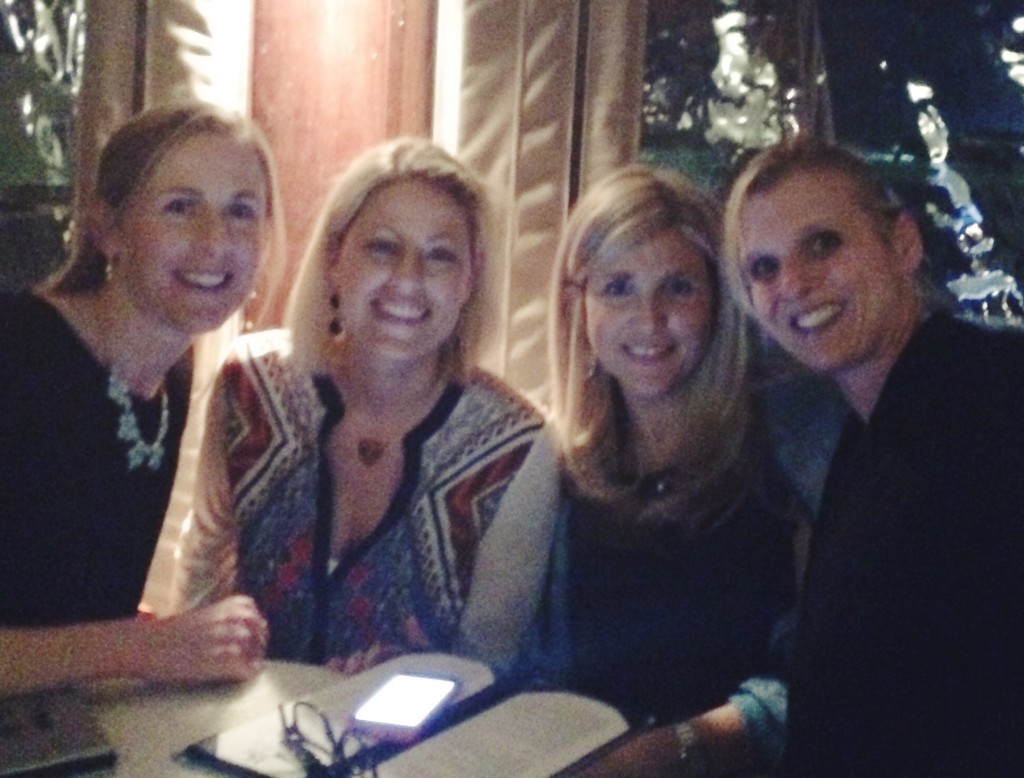 FIG was constantly mentioned when asked where we should eat, so it was highest on our list. They serve local, farm fresh food which is right up our alley. Due to the busy weekend we were only able to procure a VERY LATE reservation (well, late for us old ladies, ha!) at 9:45PM. I’m not sure if it was the fact we’d hyped it up for the past few years or the late hour, but I have to say the food wasn’t as incredible as we anticipated. It was definitely good, but… not our favorite. I ordered steak and it was on the drier side. Poor Arie ordered Brussels sprouts which was mentioned as part of one of the appetizers and turns out it was just a few leaves from the brussels, ha! Leave it to us old ladies to be disappointed we didn’t get our sprouts. The service was good and we enjoyed our meal, but we found better eats along the way as you’ll soon see. FIG is highly rated on Yelp so I’m guessing it was just an off night. Here’s the menu the night we ate there, I’m sure it changes frequently according to what’s in season: 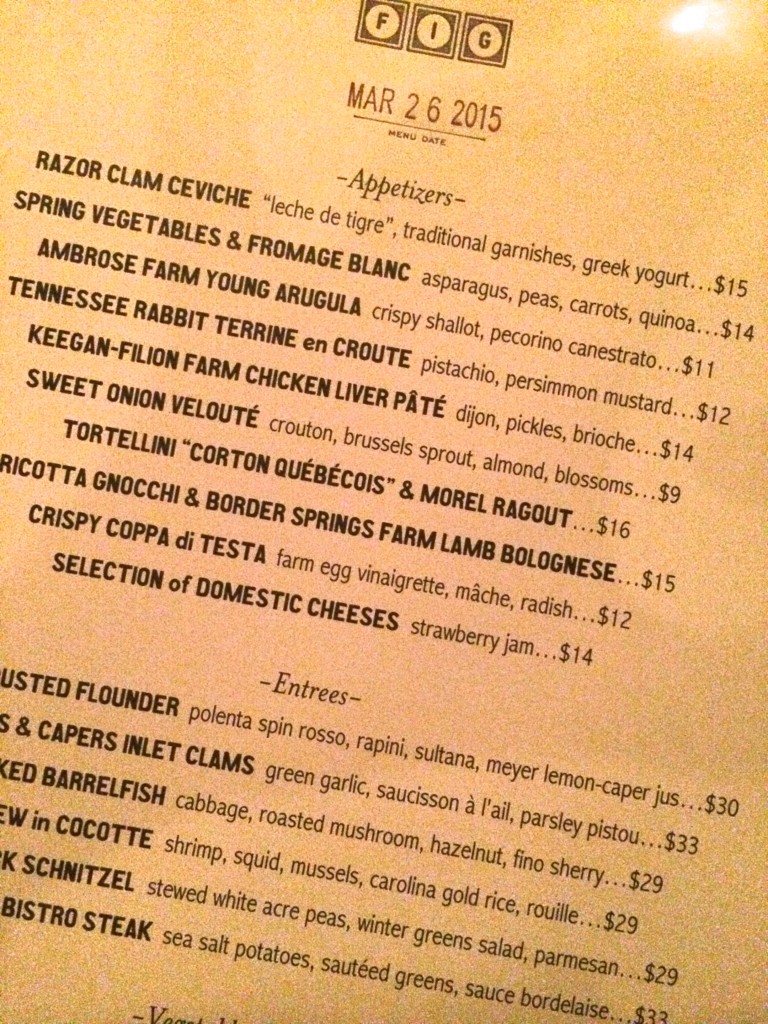 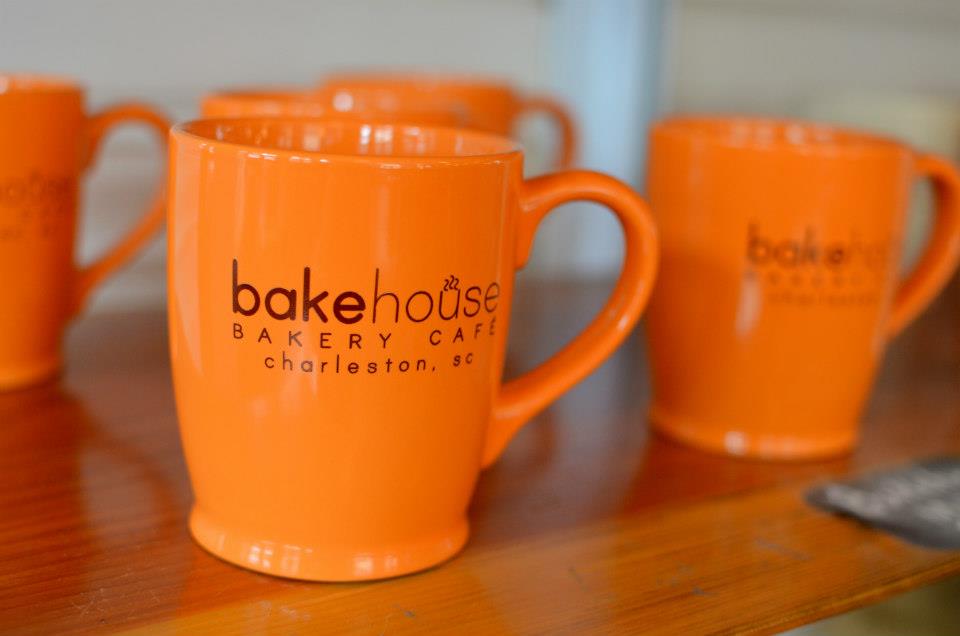 Getting coffee here was part of our daily (sometimes TWICE daily) ritual. The girls enjoyed lattes and I indulged in iced coffee. They also had oatmeal available for a quick breakfast along with some other delicious treats that normal gluten-eating people can enjoy. The atmosphere was light and airy and I was obsessed that they used moulding as an all-over wall treatment (once a DIYer, always a DIYer)….

Out of all the meals, this was my favorite. We had reservations for lunch but inadvertently came at the wrong time (2 hours late, eeek!) Even though they were approaching closing time and turning people away, the hostess was accommodating and after a long wait we got the very last table. WORTH IT. We were tucked away in a sunny corner where I soaked in the modern southern decor. We started off with flaky biscuits, which I couldn’t eat since I’m gluten-free but sure did seem popular: 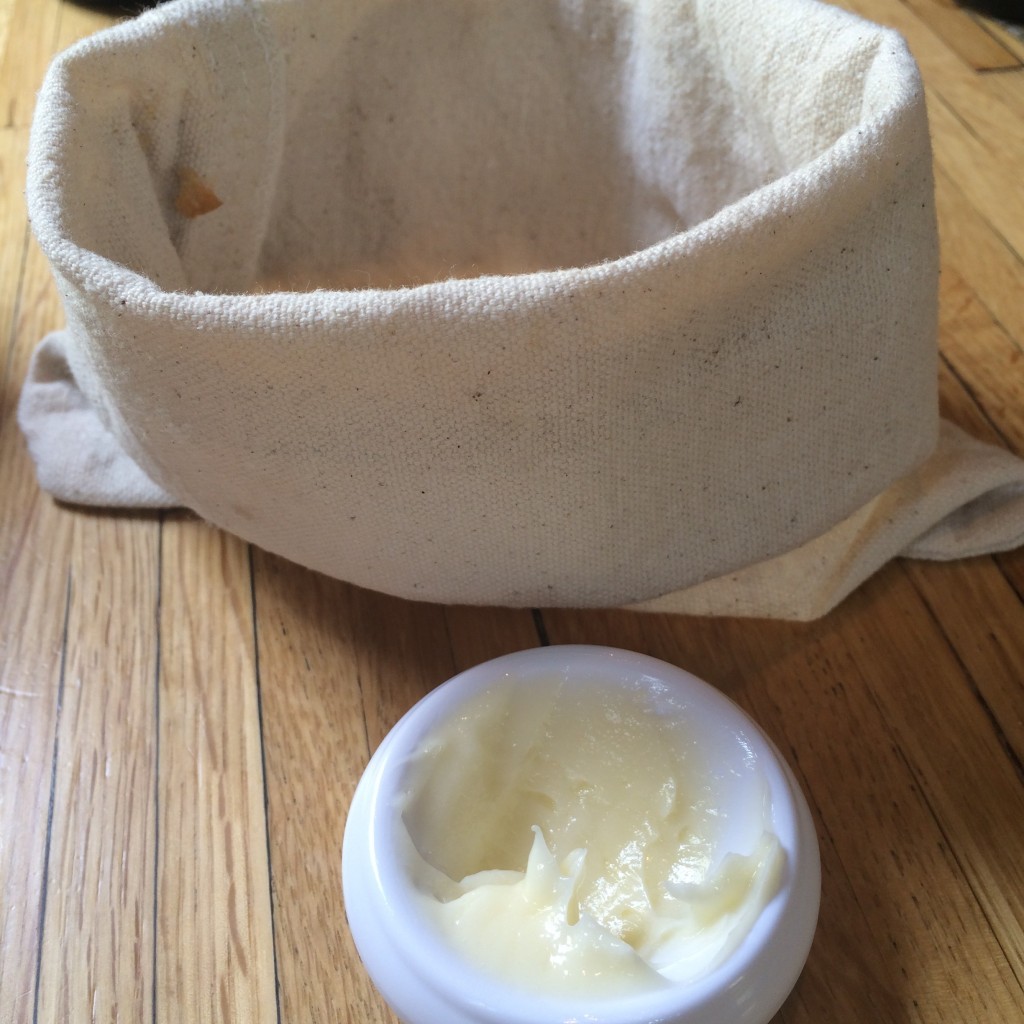 Next came the Husk Puppies (see what they did there, har har!) Hush Puppies are one of my favorite foods in the world though, so this splurge was 100% worthwhile. They were perfection with a mustard dip on the side. And served in a tiny kettle. CAN YOU EVEN?! 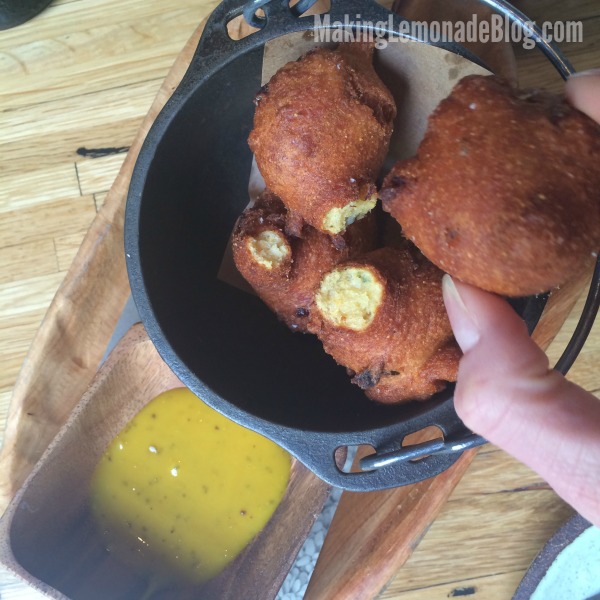 However, of all the dishes I ate in Charleston the Shrimp and Grits at Husk were by far my favorite. I’ve been on a restricted diet so long that perhaps it was the mere sensation of creamy, corn goodness but after tasting this I never want to go back to the traditional shrimp and grits again. The tasty shrimp were swimming in a tomato broth with sausage which perfectly complemented the melt-in-your-mouth grits. Have mercy! 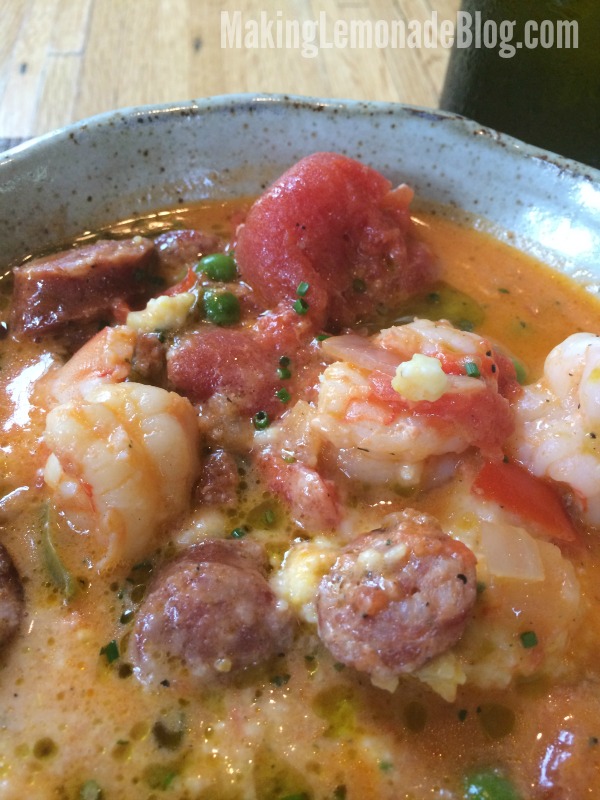 Tucked away in a cottage on a side street is Cru Cafe. I was nervous when we walked in– space was TIGHT and it was like eating in someone’s (sunny) living room! However there was nothing to fear, as the food was delicious. The rest of my crew picked this as their favorite meal. I gulped a glass of sweet tea (I HAD too, I allow myself one every time I visit the south). They offered half sweet and half unsweet for the uninitiated (or un-sweet tooths) if you so desire. Then we decided on an order of truffle fries for the table. 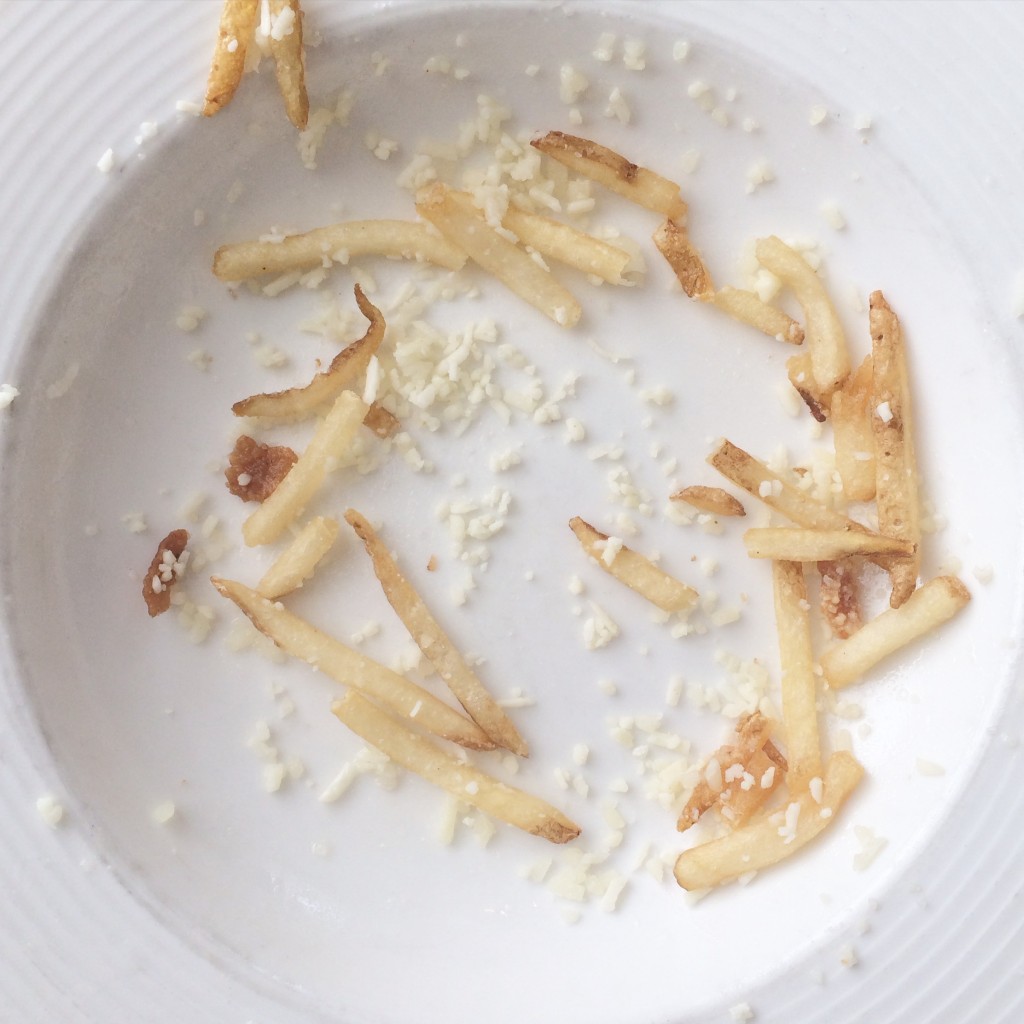 BOOM. Those went fast. It seems like a sin, but my lunch was a salad. However, we agreed these simple salads were indeed the best! I had the Chinese Chicken Salad (minus the wontons) and the chicken was so fresh and tasty. My friends had the Butter Lettuce Salad with gorgonzola, walnuts and pears and agreed it was outstanding. Other diners were enjoying meaty sandwiches (pulled pork, BBQ, etc.) that sure seemed popular as well. This is certainly on my “must eat” list if we return! 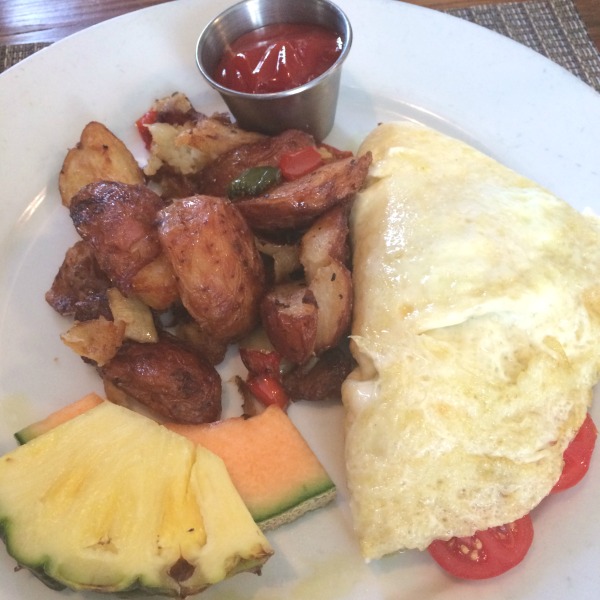 I’ve been hearing about Poogan’s Porch since I lived in Charlotte which was (gulp) over 12 years ago. A local hangout and favorite of tourists, Poogans is named after a beloved pooch. We ate brunch here on race day and was the only place we could get into without reservations. The food, unfortunately, was mediocre. There wasn’t much on the menu I could eat so I settled on an omelet. It looked delicious, however had zero flavor. It was like a thick egg burrito. I ended up picking out the vegetables inside and eating those instead. The girls’ didn’t much like their meals either. It was family friendly and is a popular Charleston choice, however I think after a weekend of Husk and Cru Cafe it didn’t measure of the the fresh food with a twist we’d been finding elsewhere. 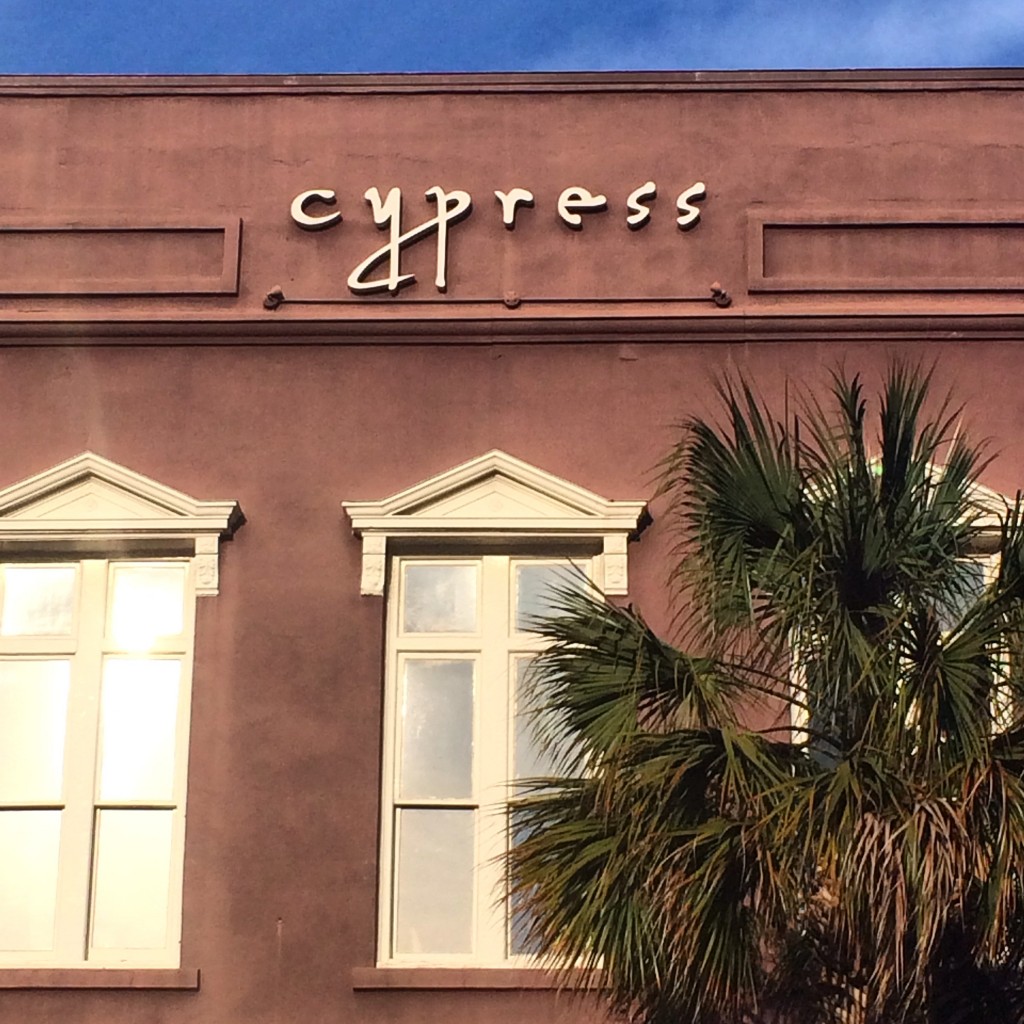 Our old standby, we became addicted to the Lavendar martinis on our last visit and knew this would have to happen again. We stopped by for an early evening drink on the second night of our trip for old times sake, then ended up back here for dinner on our last night because our reservations fell through at another establishment due to the Bridge Run. The hostesses were so friendly, and we got a table upstairs. Unfortunately with my food issues there wasn’t much I could eat, and they had just changed the menu so the items I ordered weren’t available. We ordered the Butter Lettuce salad as a starter because it has BACON JAM. If you haven’t experienced bacon jam yet, let me tell you… it’s a situation you want to have happen. 🙂 My friend ordered a dish and all I remember were the fresh spring peas– we all enjoyed it! Our meals were far from stellar, but the desert (a molten chocolate cake) was amazing. I ignored the cake part (gluten, ugh) and went straight for the molten part. This was the only dessert we ordered the whole trip, and we got two, and we DESTROYED them.

The two-story wall of wine is a MUST SEE, you can see it on the right side of this photo, but better in the photo at the very top of this post. Keep in mind we’re on the second floor, it stretches bottom floor to ceiling! Watching the servers walk up the spiral stairway to get up there made me dizzy. Or maybe it was the lavender martinis. 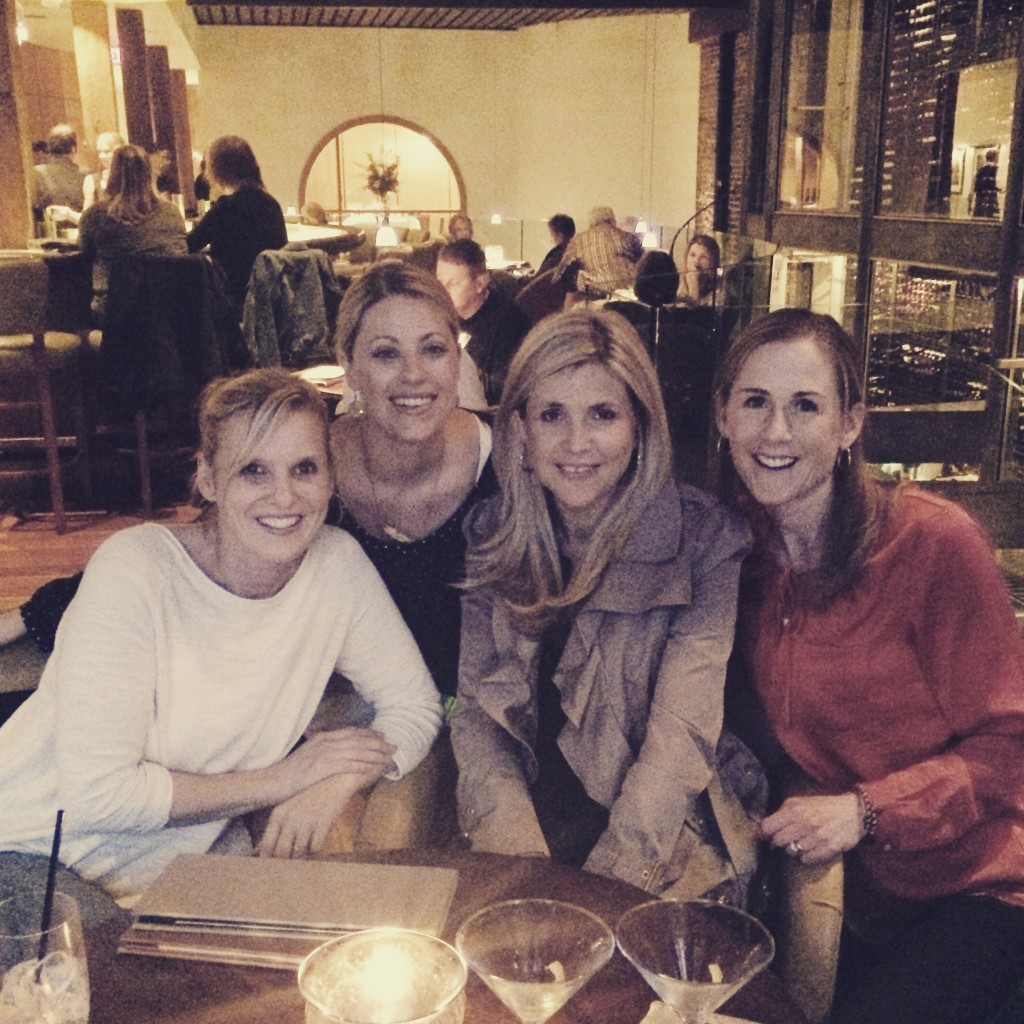 The Drawing Room at the Vendue 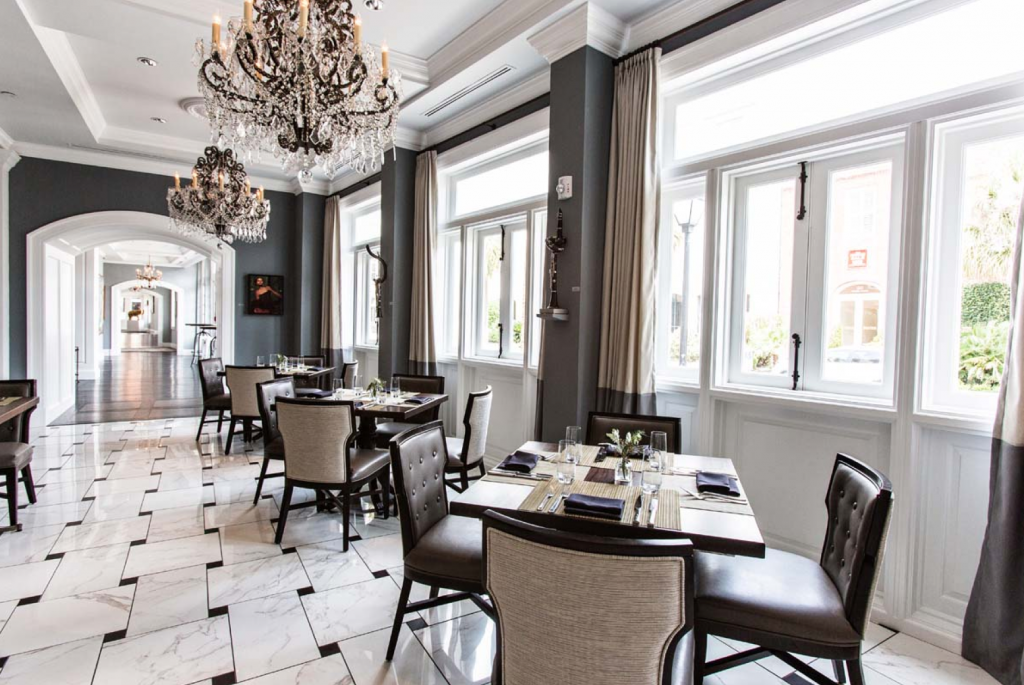 We wandered around on our last morning in town looking for a sit-down brunch, and made a huge loop and ended up a few steps down from our hotel at the restaurant at the Vendue. We had stayed at the Vendue a few years ago and wanted to check out the recent renovation anyway so it was the perfect choice– and we couldn’t believe how much it’s changed! It’s now an artistic boutique hotel (changed from a traditional & elegant southern style). Breakfast is breakfast– but I have to say we enjoyed this one. I had fresh fruit and bacon. Nothin’ better (and hey, gluten-free!)

I’ll end with this luscious quote about Charleston from legendary Pat Conroy:

“An inoculation to the sights and smells of the Carolina Lowcountry is an almost irreversible antidote to the charms of other landscapes. You can be moved profoundly by other vistas, by other oceans, by soaring mountain ranges, but you can never be seduced. You can even forsake the Lowcountry, renounce it for other climates but you can never completely escape the sensuous semitropical pull of Charleston and her marshes.”

Come for the history, stay for the food. Charleston will always be one of my favorite places in the world, even though the hospitality we experienced ranged from aloof to your new best friend (more the latter than the former, thankfully). As usual, we appreciated those that took the time to chat and make us Yankees feel welcome. As for my friends, it just keeps getting better. Love them with all my heart!

Please share your Charleston restaurant recommendations to help all those planning a trip to the Holy City (of eating)! And, any places to stay far away from? Dish (ha!) in the comment below! 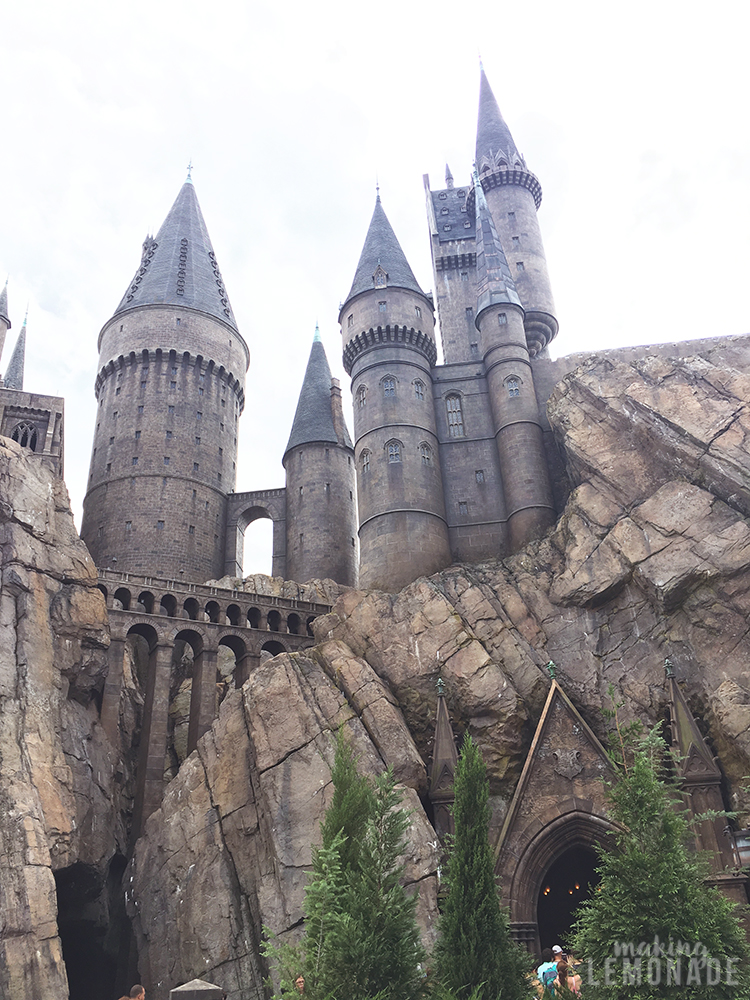 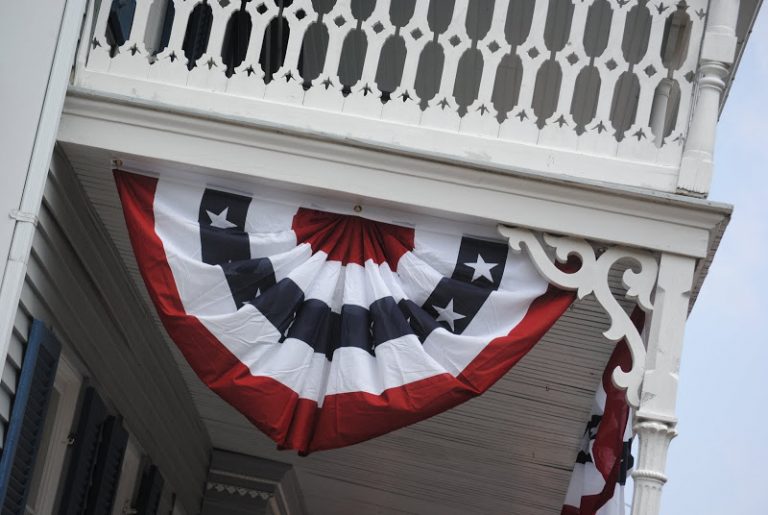 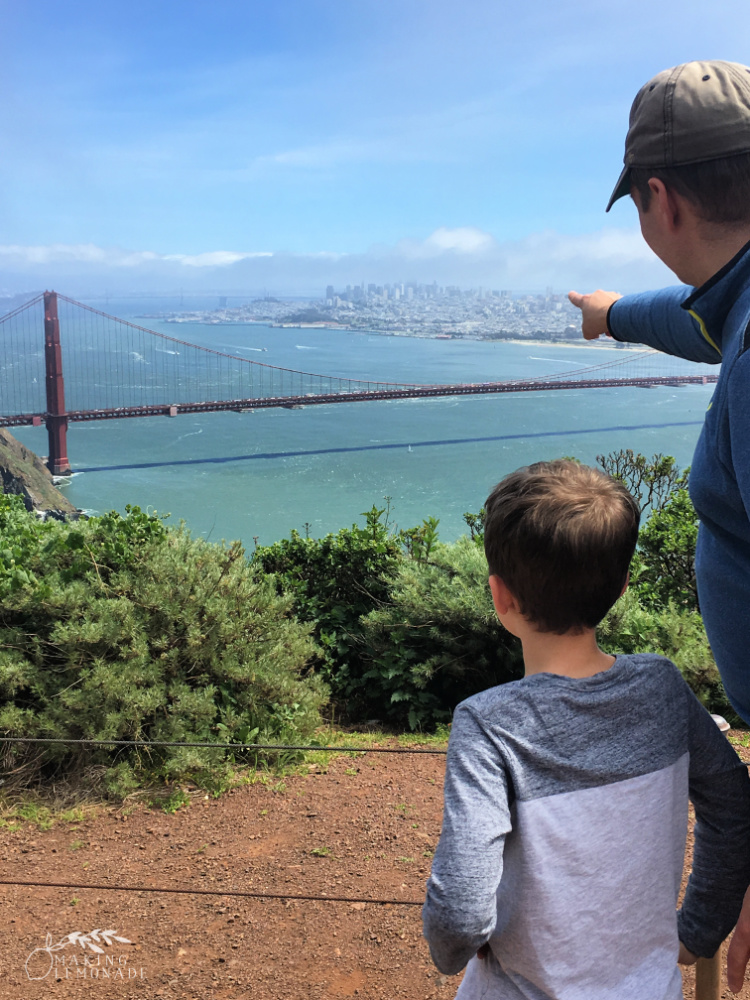 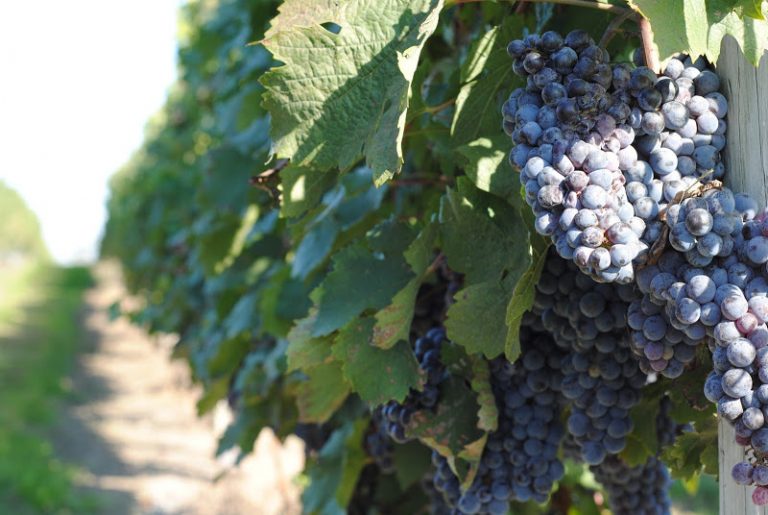 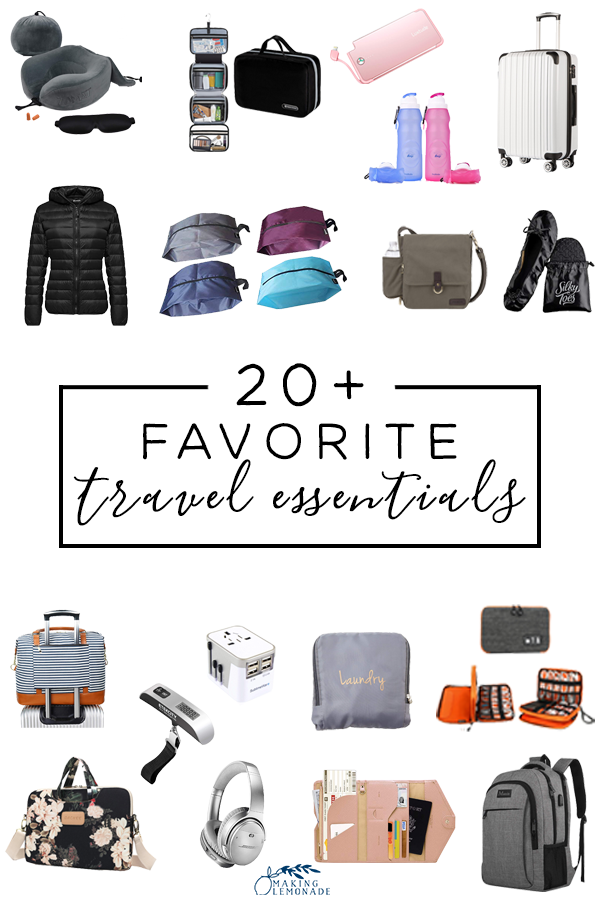