I realize Father’s Day was weeks ago and I’m just posting this tutorial now.  I’m going with the adage “better late than never,” because the day when I can pull off writing a tutorial before the actual holiday is probably not in the near future!  And really, this could be a gift for anyone on any occasion: Mother’s Day, a birthday, a wedding, an anniversary… consider it the little black dress of gift ideas.

First of all, let me show you what my husband crafted with the kids for my Mother’s Day gift this year: 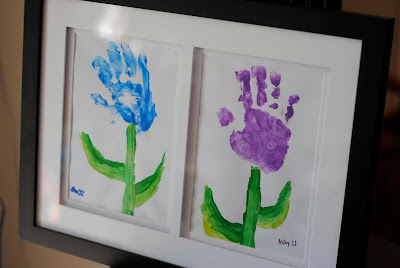 Paint.  With a one-year-old and three-year-old.  More paint.  On hands.  Did I mention paint?  HE WINS.  Which means I needed to step up my game.  A card just would not do it this year.

The following is probably a tutorial on what NOT to do.  However, by either following my method or the helpful hints/ideas that I give along the way you WILL have a clock with a photo in it at the end.  Promise! 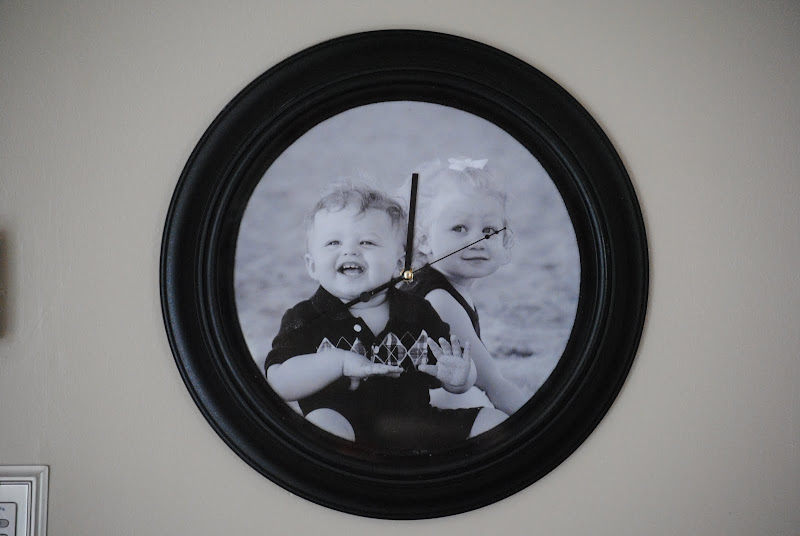 When I saw a photo-backed clock on the Better Homes and Gardens website, I thought, “hmmmm, that could either be really cute or sorta cheesy.”  I put it out of my mind until I spotted a pile of clocks at a local thrift store.  My hand moved over them until I found one that had a fabulous frame (‘good bones’, if you will).  I finally bought it with the thought that even if I didn’t keep it as a clock it would make a great frame.  Because I’m kooky like that.  Why I can’t just buy a round frame I’ll never know.  Gotta make things hard. 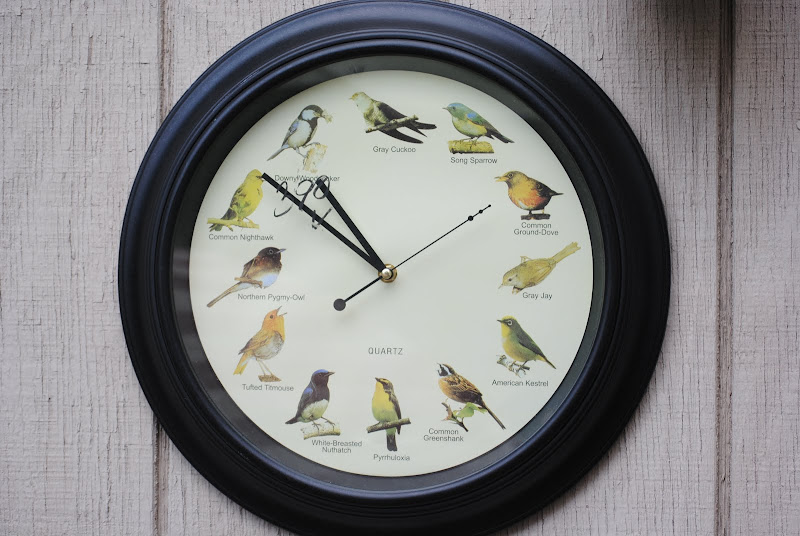 SO.  I was enjoying my post-thrifting glow and dozing off to sleep with visions of this bird clock in my head when it hit me like a ton of bricks:

Sure enough, I flipped it over the next morning and doh-doh-dohhhhhhh.  Bird sound box.  But the good news is it had a separate battery area for that function.  Whew.  But first, I needed to make sure it worked at all. 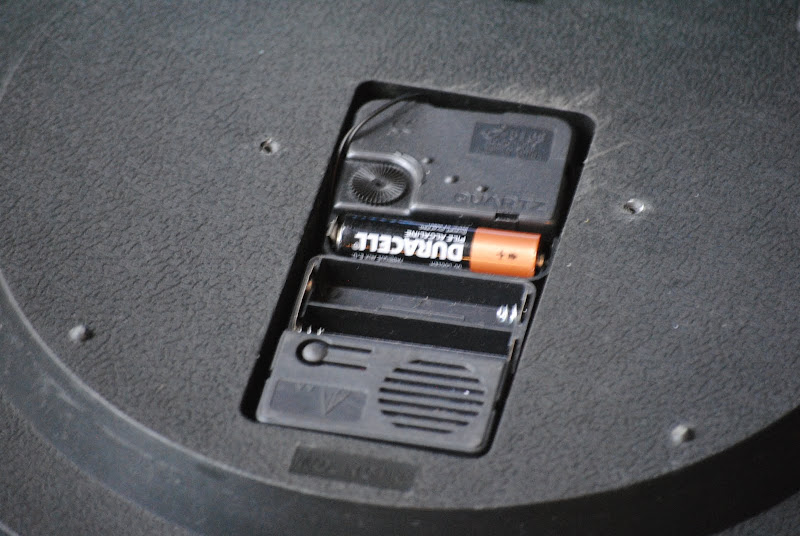 Woot!  It works.  And no bird calls.  So step #1: I unscrewed the ring, collected the screws in a baggie, and cleaned the glass with Windex. 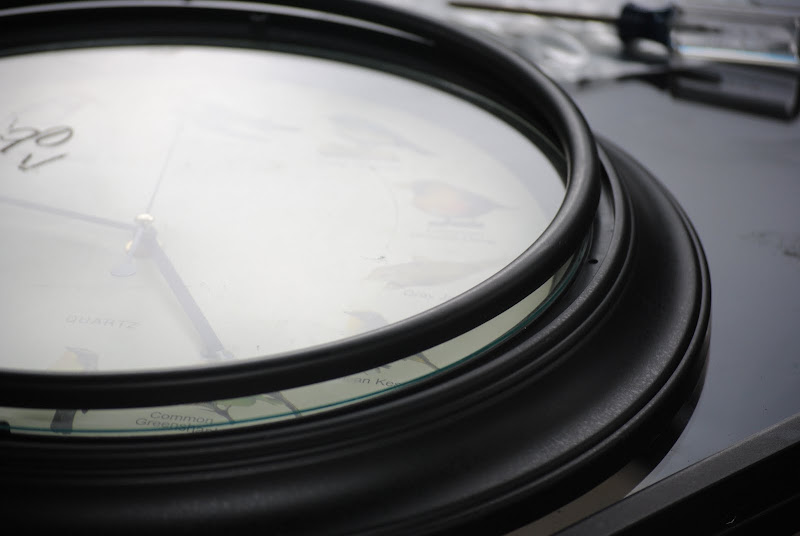 Step #2: I enlarged a favorite photo to 12 by 12 inches (the clock face is 11 inches in diameter so that would give me a little wiggle room) at Ritz photo.  You can do this at many different photo places including CVS, but I needed it done quickly in an odd size. 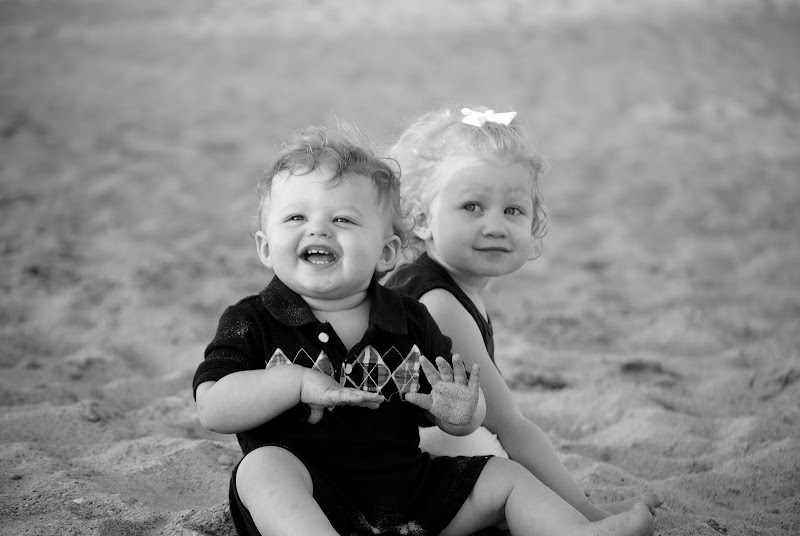 Step #3:  I put a dot in the middle of the glass so I’d know where the mechanism would fall.  I used that as my guide to decide where to place the photo so the the picture looked it’s best.  I traced and then cut out the photo using the glass as a guide.  Which was dumb, because the glass was bigger than the face of the clock.  So I trimmed it freehand.  Even dumber, because then the back was showing through in several spots.  See how I fixed it in step #5.  Simply using some old fashioned mathematics and a ruler could have helped immensely!
There’s a dot on the glass near Bee’s ear to help determine correct placement.  Wipes clean with Windex. 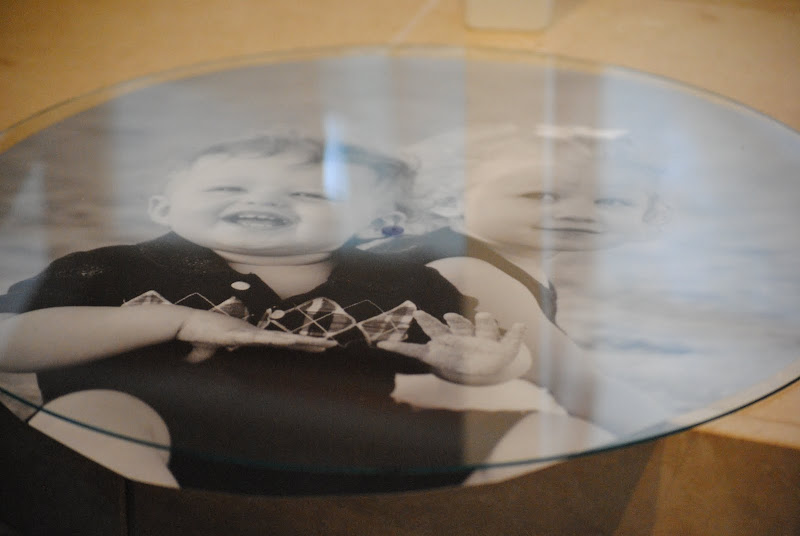 See where I cut it unevenly?  Note to self: math is your friend.  Use it. 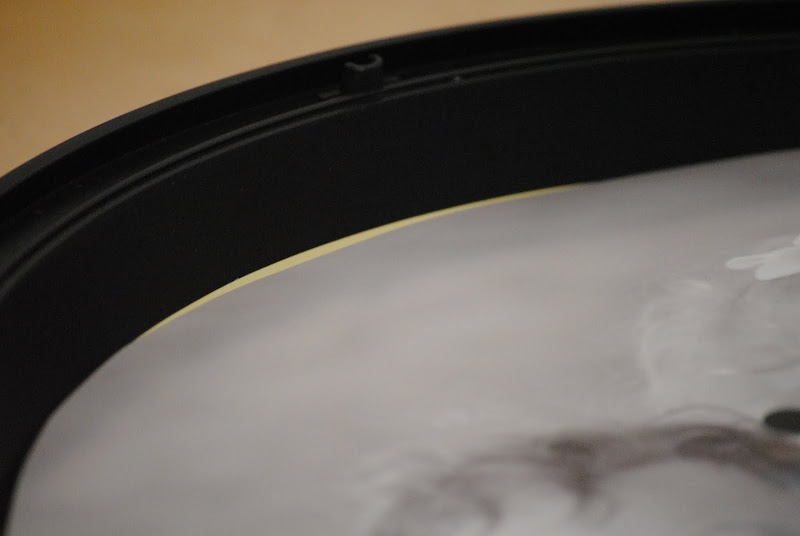 Step #4:  Finding the center, I cut a small hole to fit the hands.  Then, I realized the second hand extended over the center so the extra piece would make putting the hands through pretty difficult.  I tried detaching the clock mechanism to simply place it through that way to no avail.  So, don’t try this at home, I bent the second hand’s extended “arm” (if you will) so I could slide it all in at once without creating a huge hole.  I used pliers to bend it back but it still looks wonky (see below for helpful hints to avoid this problem): 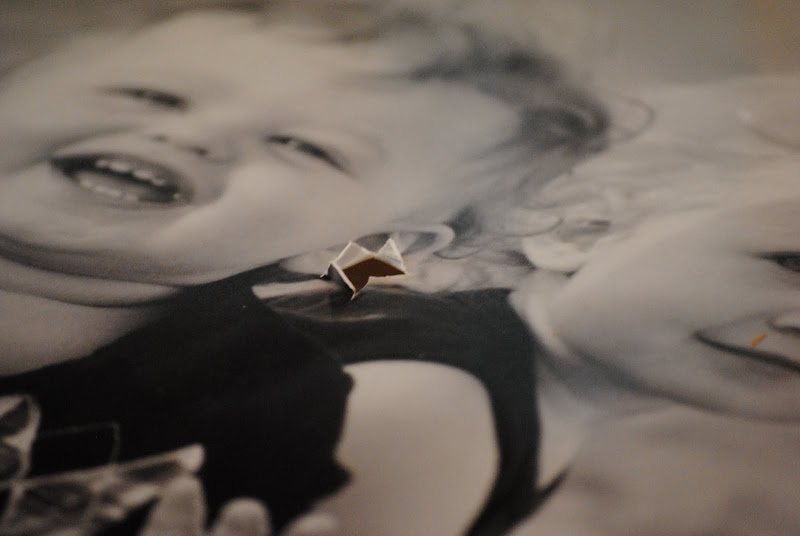 Wonk, wonk.  There must be a better way. 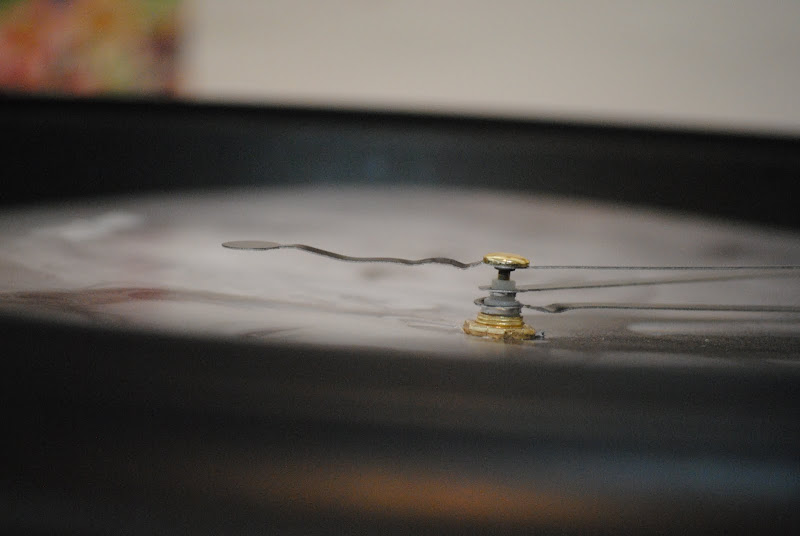 Step #5: I applied adhesive (a photo-safe glue stick) to the clock face in sections and glued the photo to the clock.  Working in a circle I pushed any air bubbles out from under the photo.  To fix my Edward Scissorhands approach to cutting out the photo, I glued black cording around the perimeter to hide the places where the circle was uneven.

Black cording glued around the edge hid my cutting sins.  The glue dries clear, I promise, I took this photo right after gluing so it looks white. 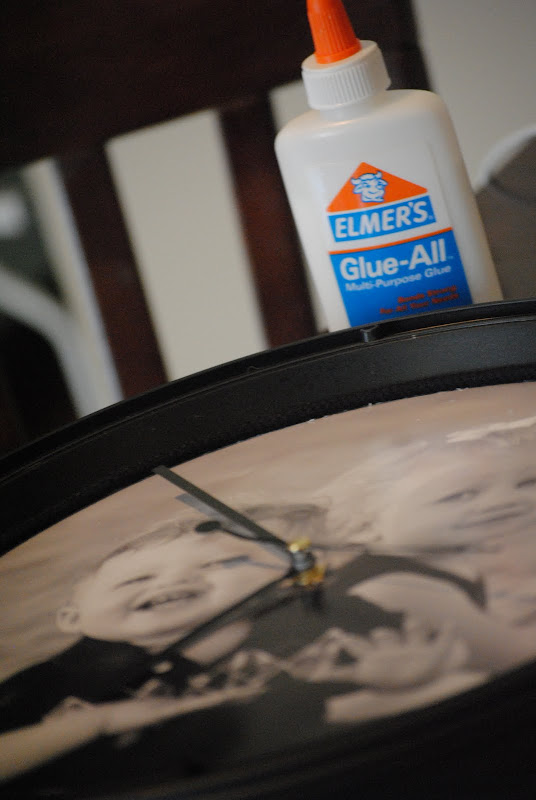 Step #6: I let it dry for 24 hours without the glass in case the adhesive off-gassed (this happened to me once with rubber cement and a plastic scrapbooking sleeve– it bubbled the plastic!) and placed the glass back on.  I screwed on the ring, and… 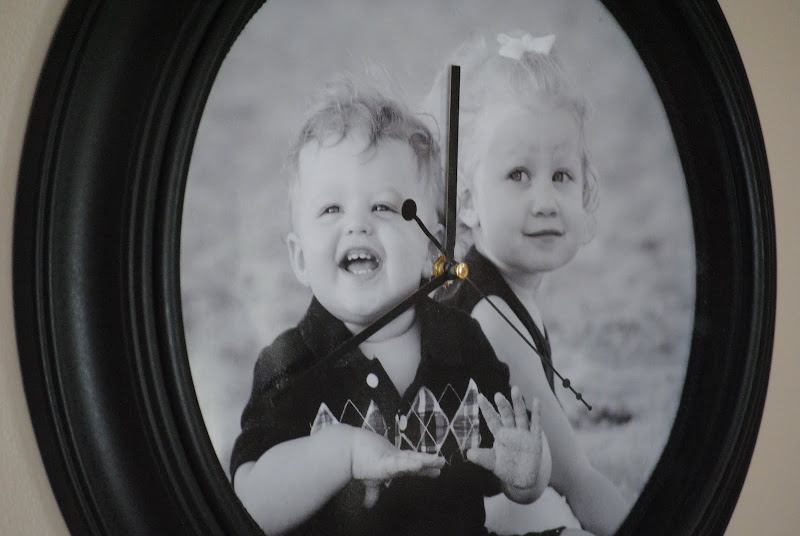 a clock for my husband with his babies on it, to hang at the office as a reminder of what’s waiting for him at home.  Little does he know the drama I could have avoided if I’d followed my own helpful hints below! 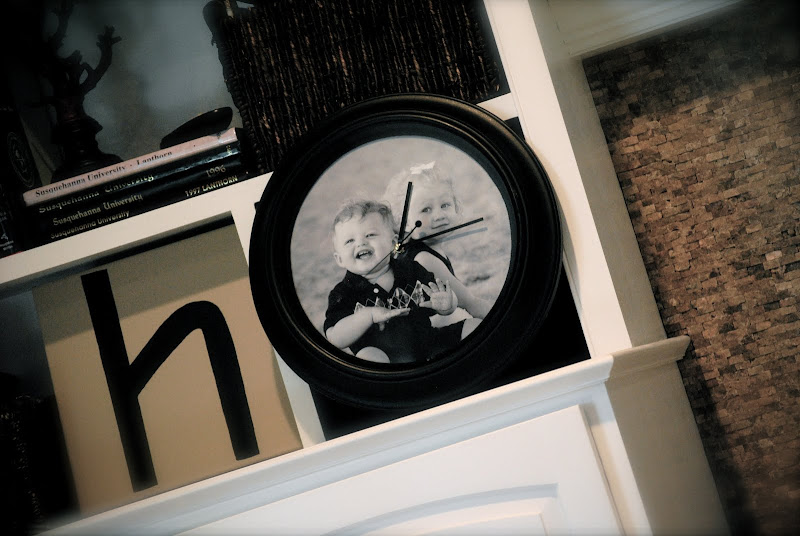 What do you think– Cheesy?  Sweet?  Wonky?  Swonky?  {I just made that one up}.  What did you give for Father’s Day this year?  I need to one-up my hubby next year after that adorbs framed flower hand print he made for me! 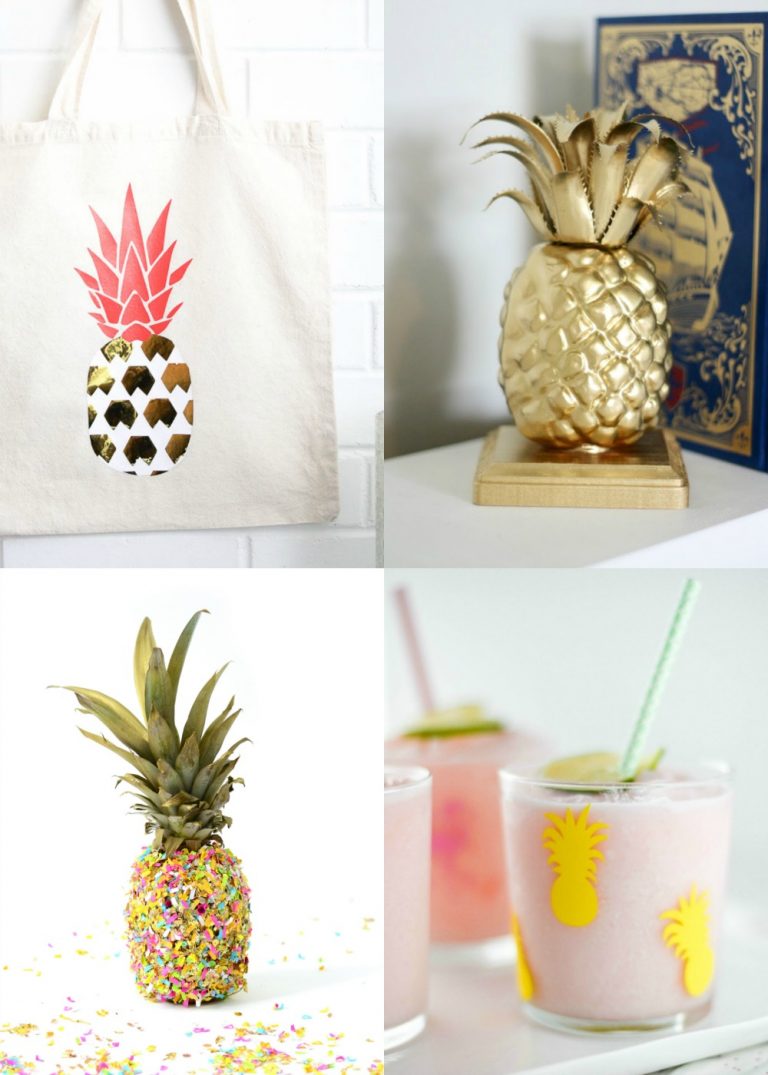 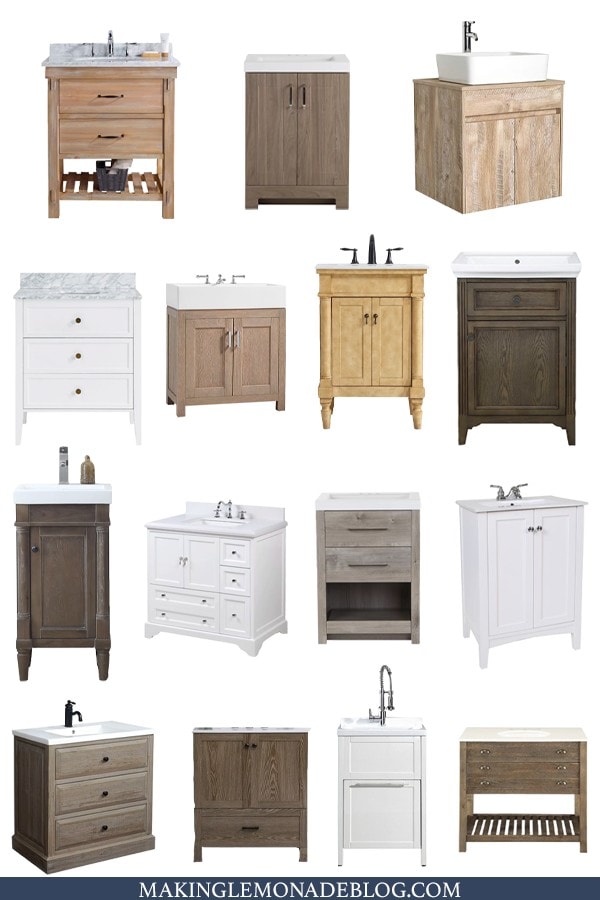 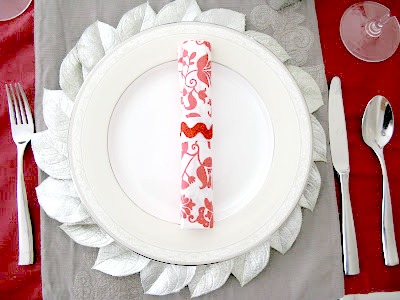