Let’s face it, as parents we’ve adapted every aspect of our lifestyle to accommodate the kids.  That leaves little time for romantic dinners and long date nights.  I’m a firm believer in family dinner time, but with a two year old on board that sometimes means I’m just sitting down to eat when when we hear, “MAY. BE. EXCUUUUUSED??!!”  {um, at least he’s polite?} 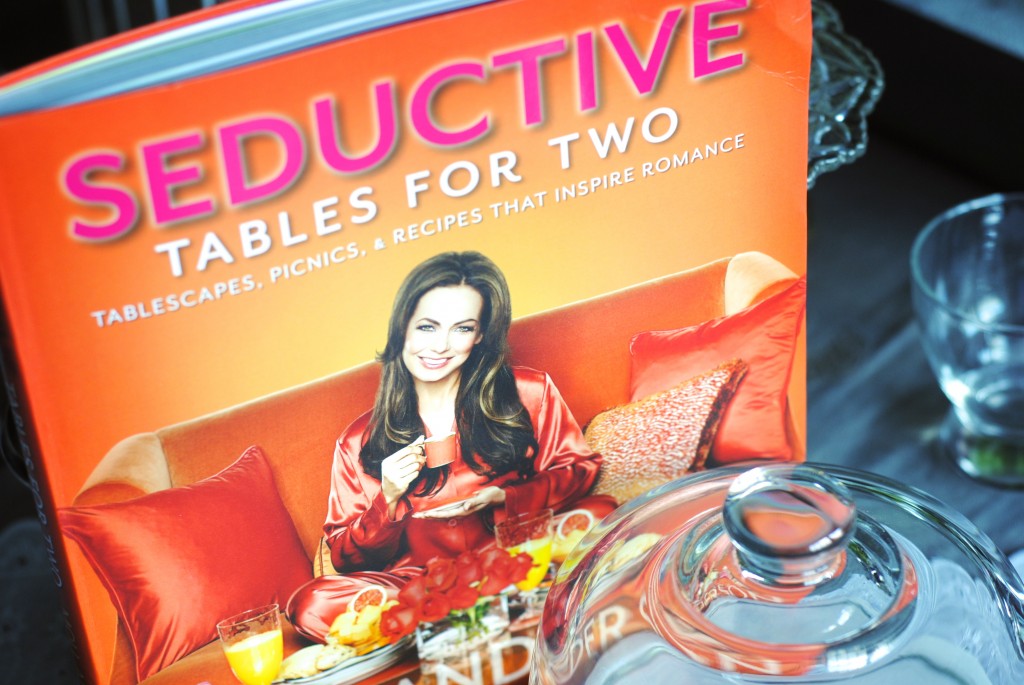 Enter Moll Anderson’s latest book, Seductive Tables for Two.  TWO, as in my husband and I.  Inside were some great tips, recipes, and beautiful photos to inspire seductive and romantic tablescapes for couples.  I knew immediately what the theme of our seductive table would be, and if you’ve been keeping track of my obsessions lately I bet you can guess it– Downton Abbey!  My husband and I have been watching it every night, trying to catch up to season three.  I decided to surprise him with a Downton Abbey tablesetting for a romantic snack of wine and cheese after we put the kids to bed, and before watching the season two finale. 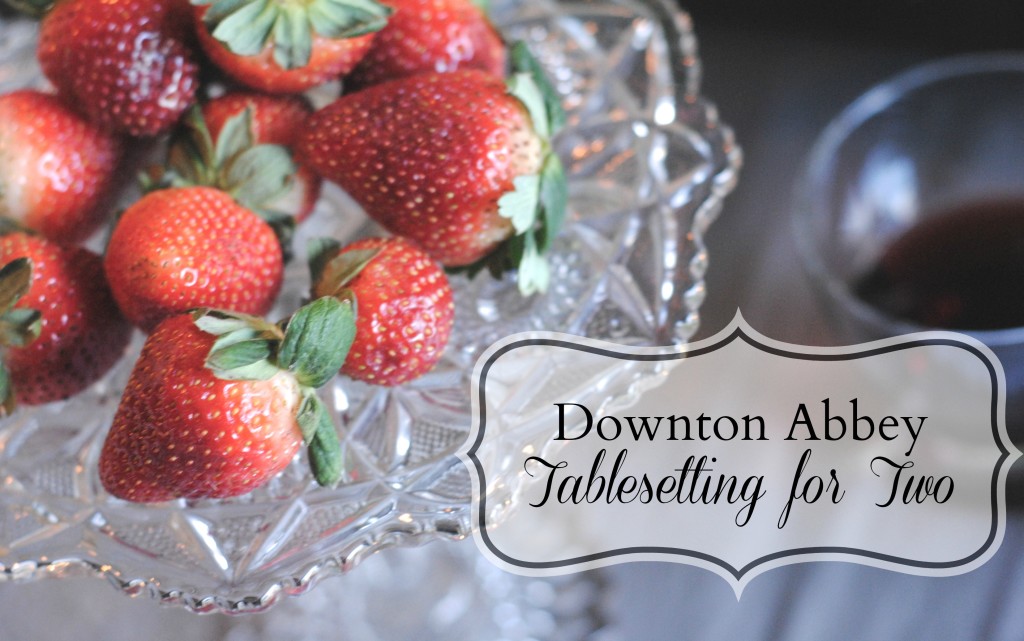 After all, Downton Abbey is full of visual inspiration.  With those details in mind I created a version of one of my favorite scenes from season one, when Mary and Matthew sit down for an informal late-night dinner.  Mary wants to ring for a wineglass, and Matthew tells her not to worry and– GASP!– pours wine into a tumbler instead. 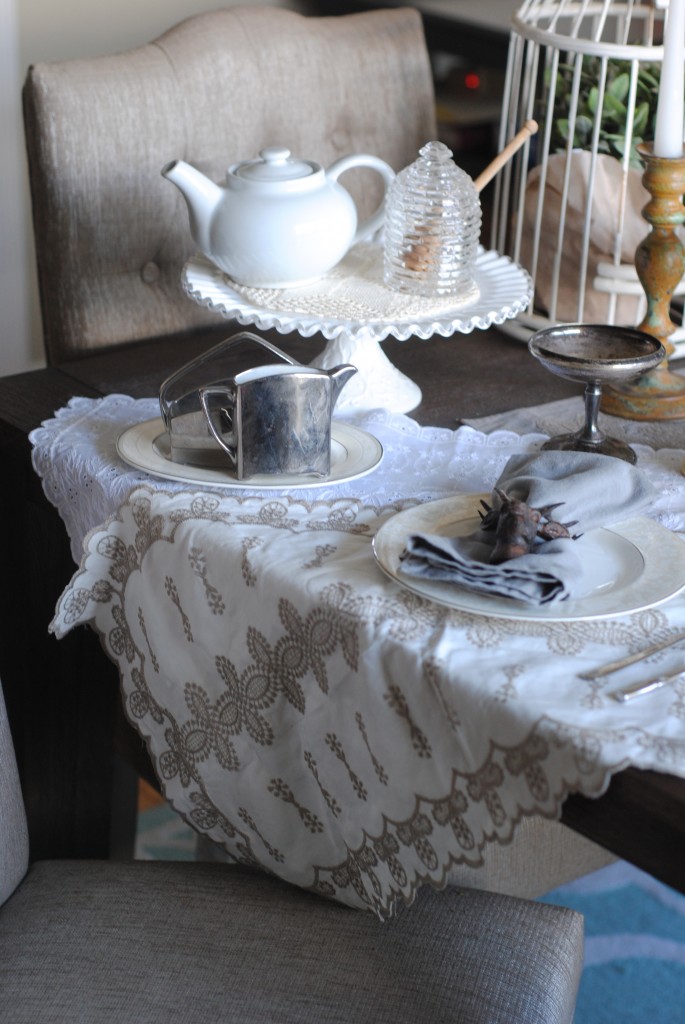 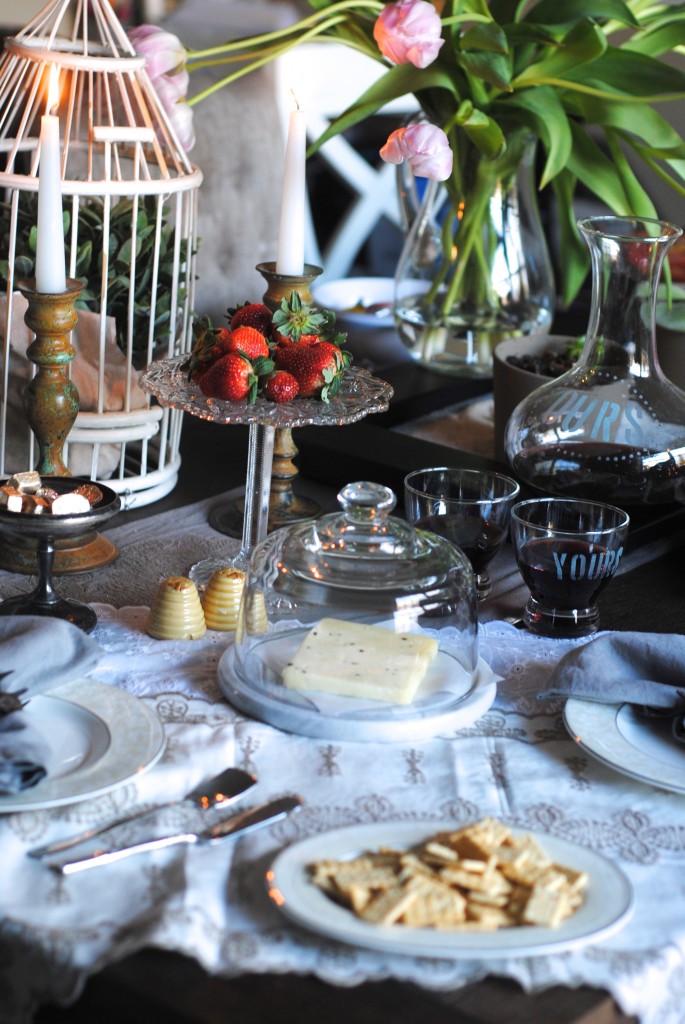 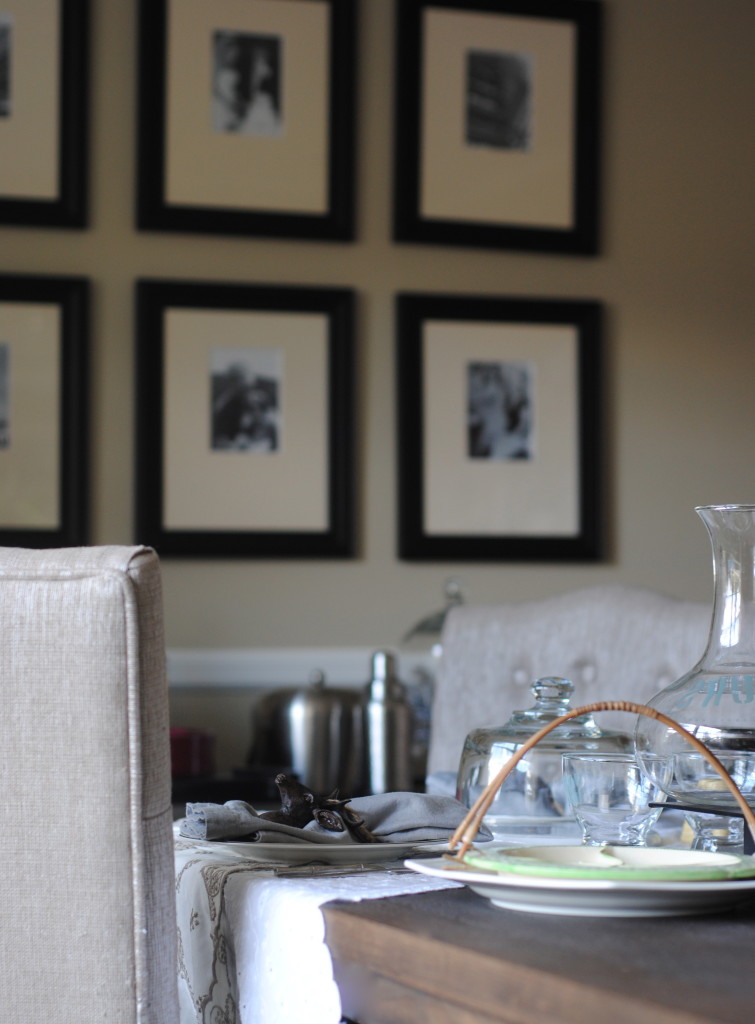 Moll Anderson reminds us to include decadent details on our tables.  For the Downton Abbey table, I made sure to include references to both the show and British culture.  Plus, I wanted the table to look masculine and feminine to appeal to both my husband and I.  I know Downton is a very formal place, but I took a few liberties since I was inspired by a famous informal moment.  Here’s a few decadent details:

The ceramic teapot is a nod to the daily ritual of tea. 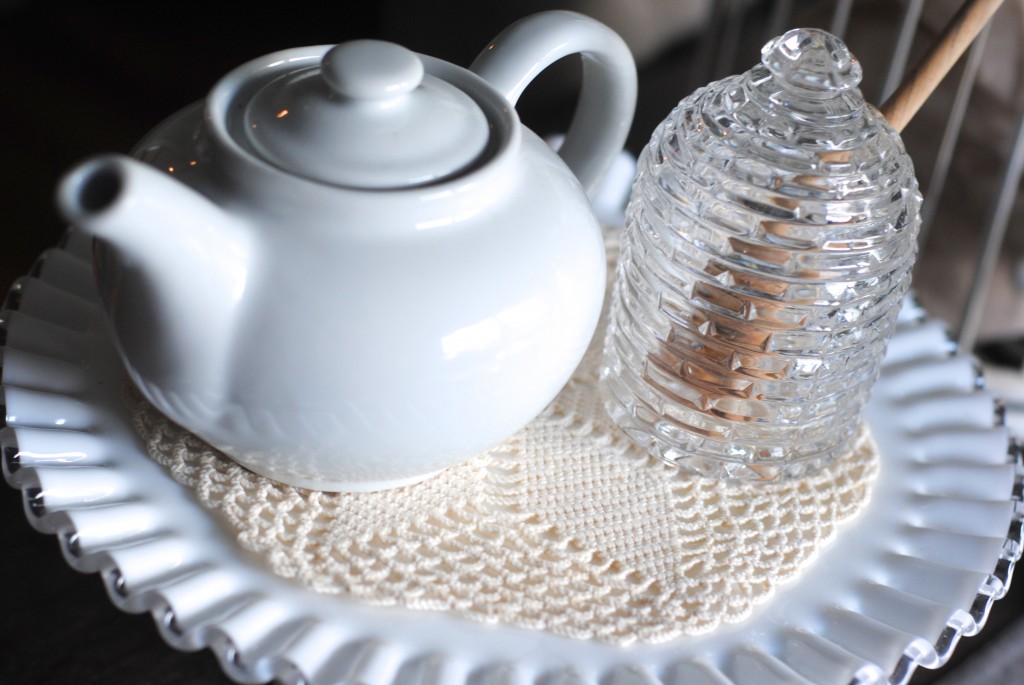 Crackers on a tray– because everything at Downton is served on a tray. 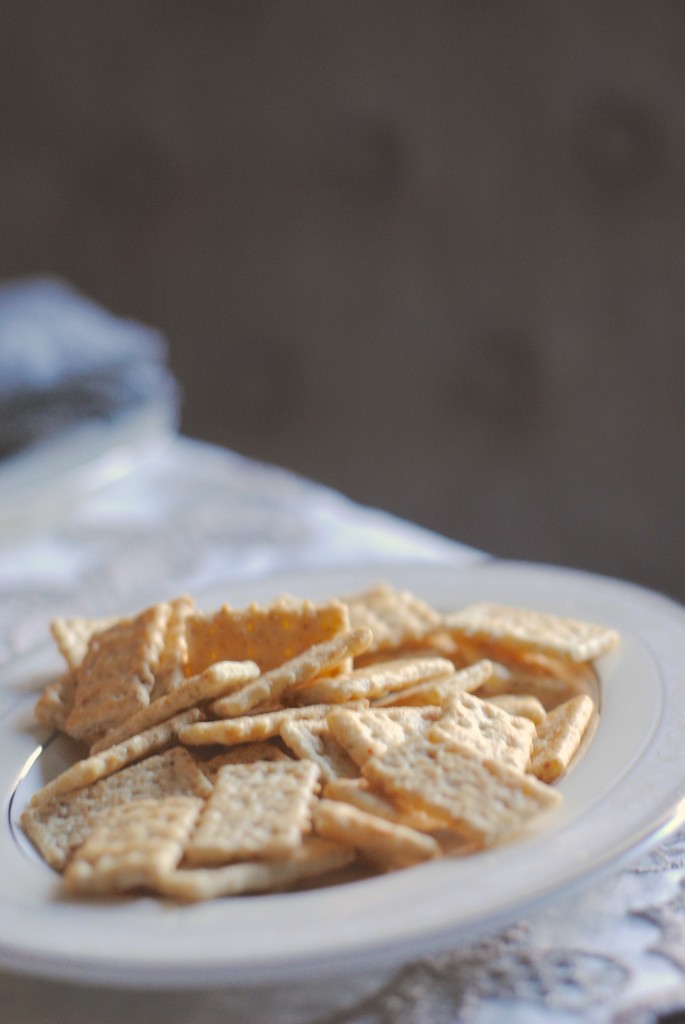 A tarnished silver goblet filled with chocolates (Carson would faint in shame, but I love the slightly shabby look). 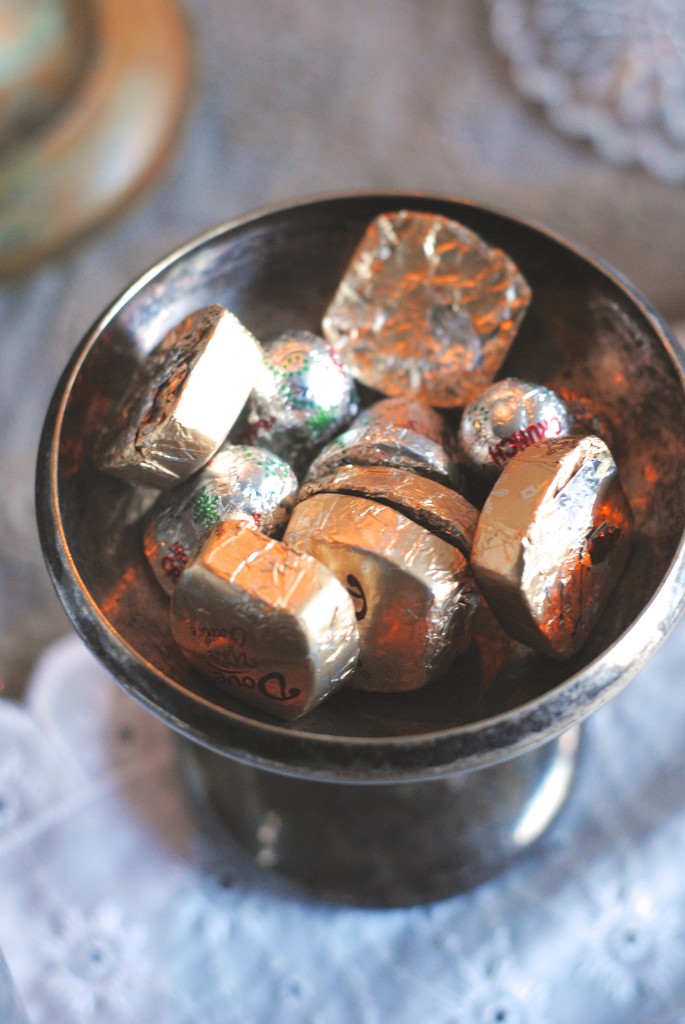 Deer napkin holders made from Christmas ornaments to signify both the country setting and their favorite hobby– hunting (I couldn’t find a pheasant, so these deer ornaments would have to do the trick; plus, they’re a masculine touch}. 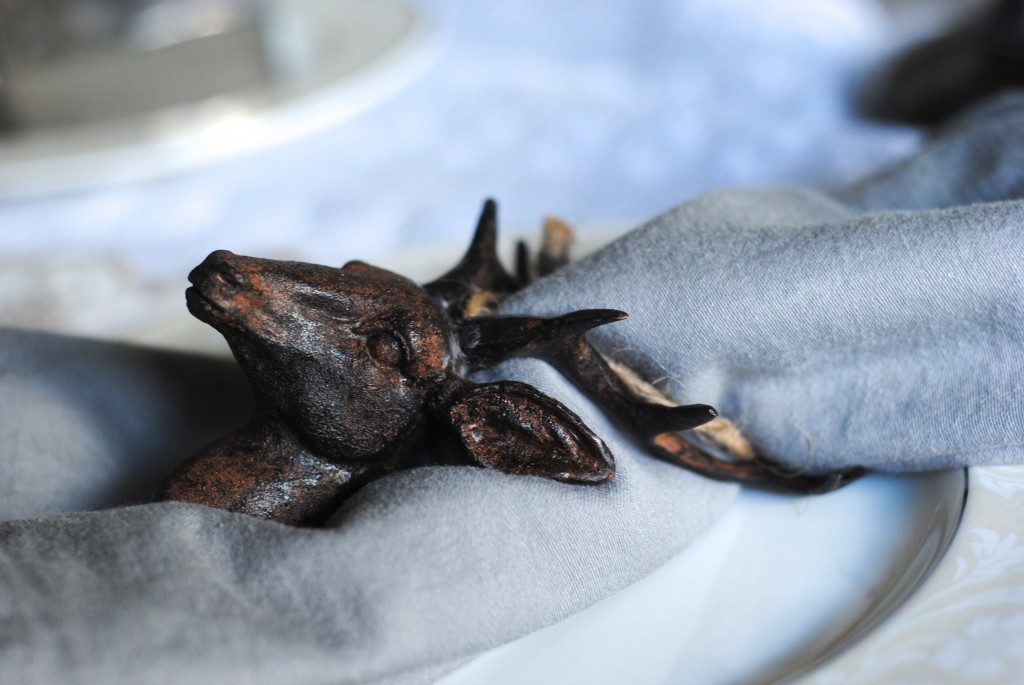 Food at Downton come under cloches, so this glass dome protects the cheese (from what, I don’t know… the Spanish Flu?). 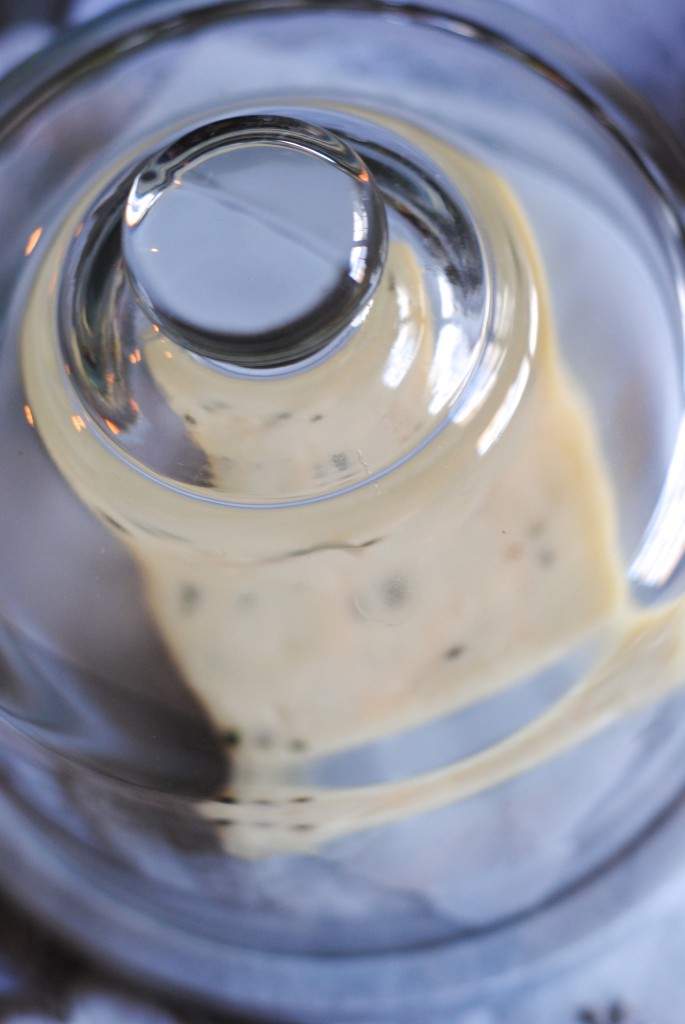 Wine and spirits are always decanted; in lieu of the eight decanters required by Lord Grantham, one would suffice for our meal. 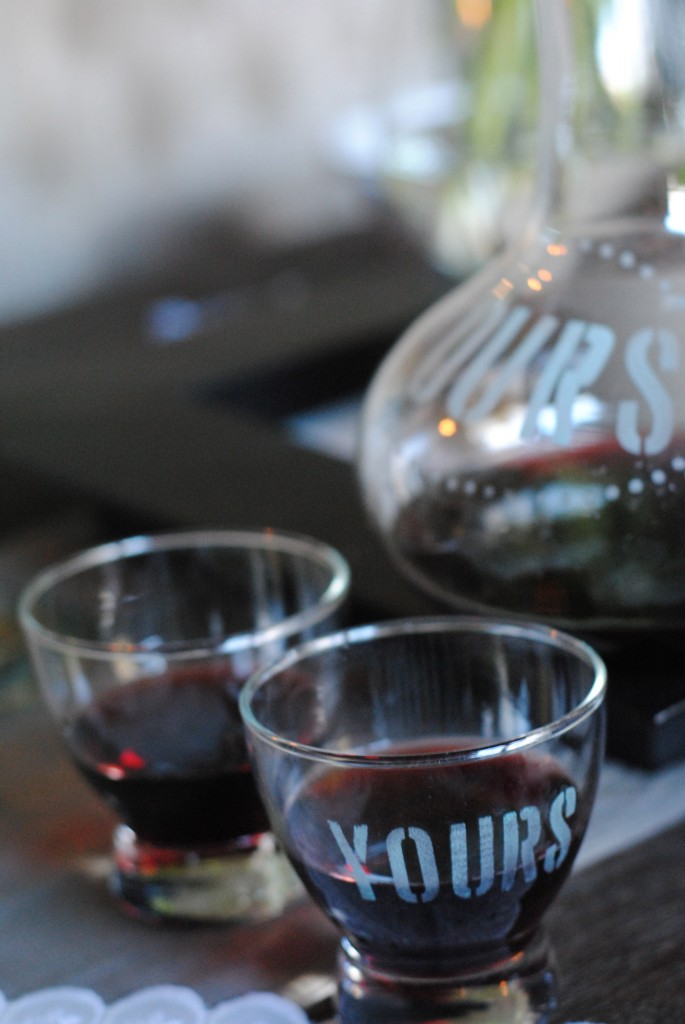 And while the Dowager Countess would most certainly disapprove, we put Dave Matthews Band on Pandora for our favorite mood music and dined under the stars (that were hanging from the chandelier). 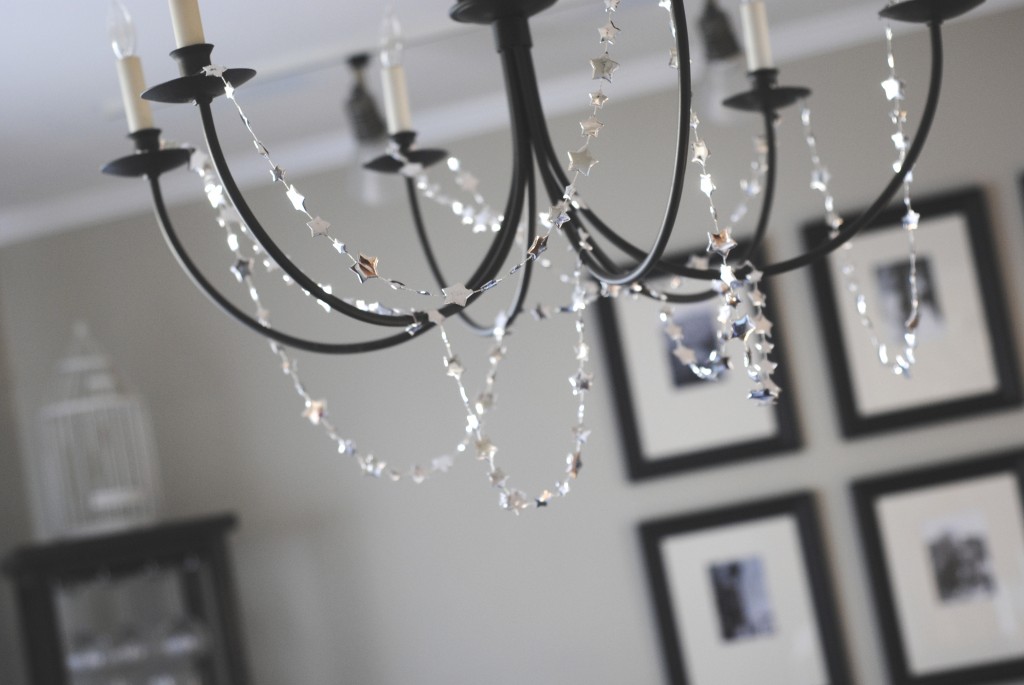 If you’d like to create your own seductive table, here’s a few tips from Moll: 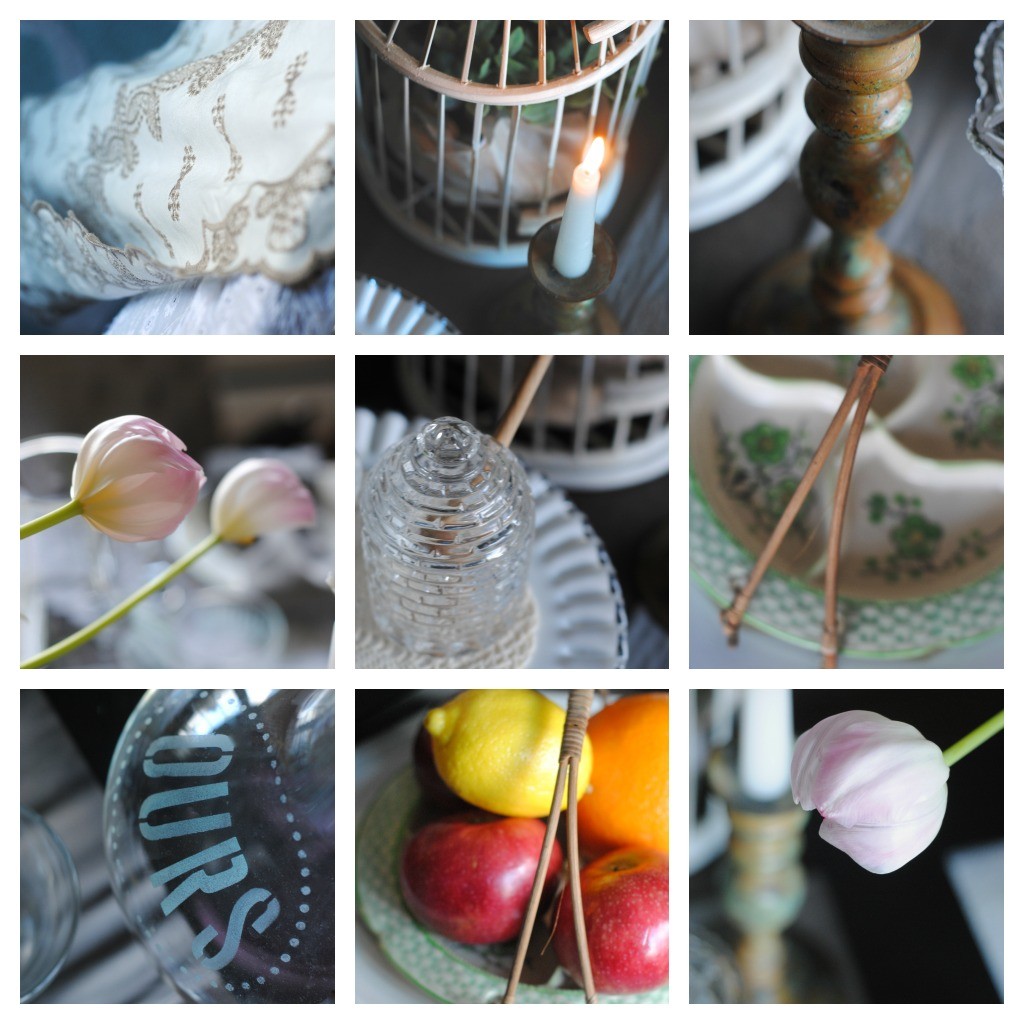 A seductive table for two, ready for romance with our favorite wine, cheese, and fruit.  A table for both formal & feminine Mary, and informal & masculine Matthew.  If you tilt your head and squint, couldn’t you see this in the Crawley household? 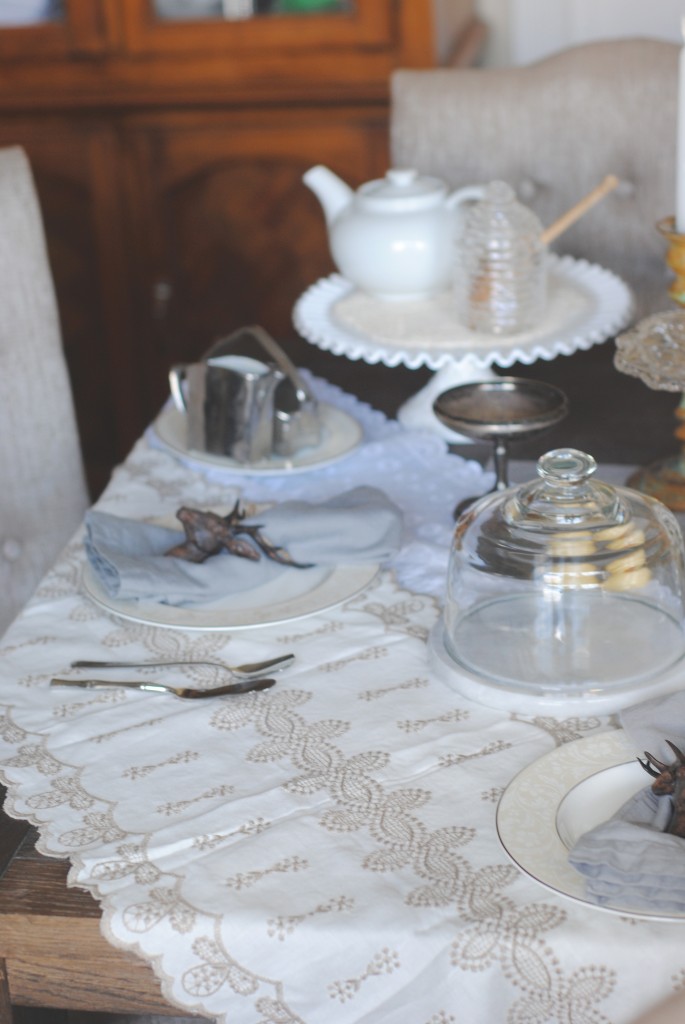 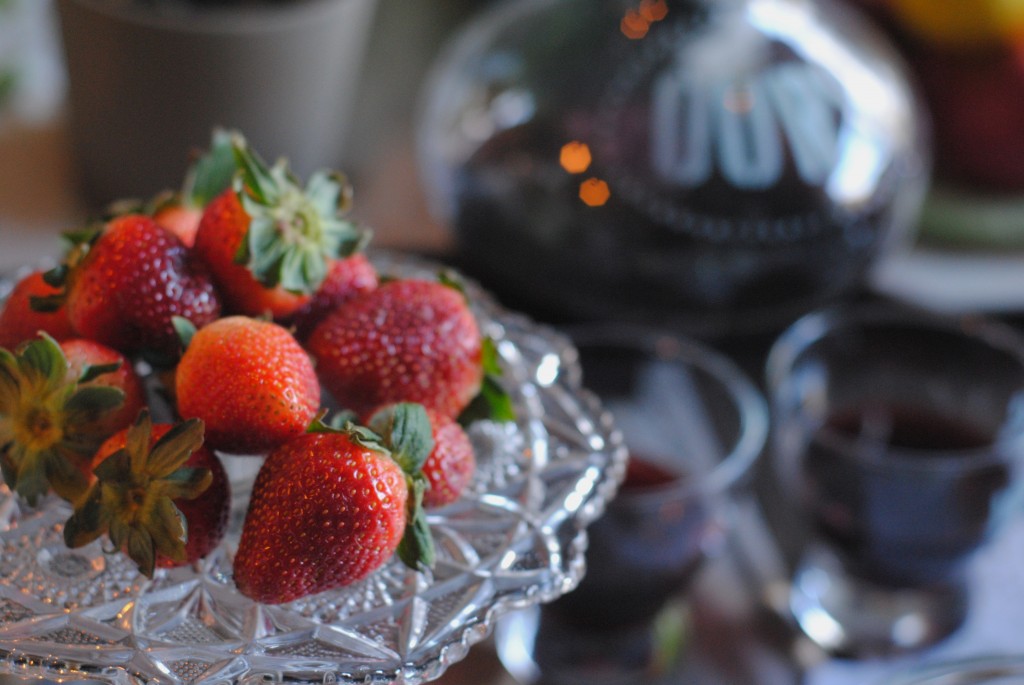 Want to learn more?  Moll Anderson has upcoming appearances on Access Hollywood and you can also catch her on her weekly radio show (XM Talk 168 every Saturday at 5:00 pm EST).  Connect with Moll on Twitter or get inspiration and updates by liking her Facebook page.  Seductive Tables for Two is available at many retailers, including Books-A-Million (where I found my copy during a recent shopping trip).

What’s your idea of a romantic and seductive table?  Can you think of a theme that represents you and your partner?  What would you include as personal mementos or favorite foods?  {and no spoilers, but what would be on the table of your favorite Downton character?}

I am a member of the Collective Bias®  Social Fabric® Community.  This shop has been compensated as part of a social shopper insights study for Collective Bias®  and Moll Anderson.  As always, opinions are my own and I was not compensated to publish positive feedback.  #cbias #SocialFabric #SeductiveTables 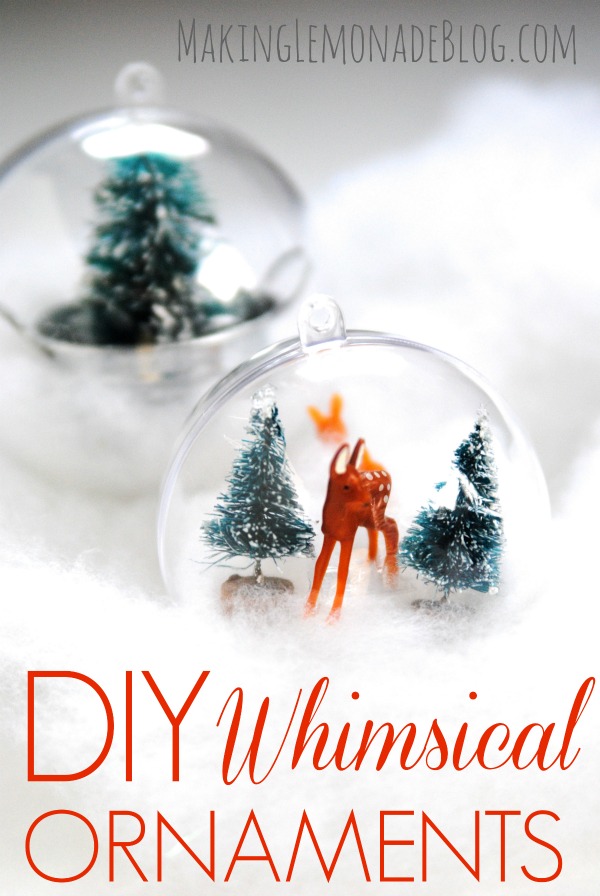 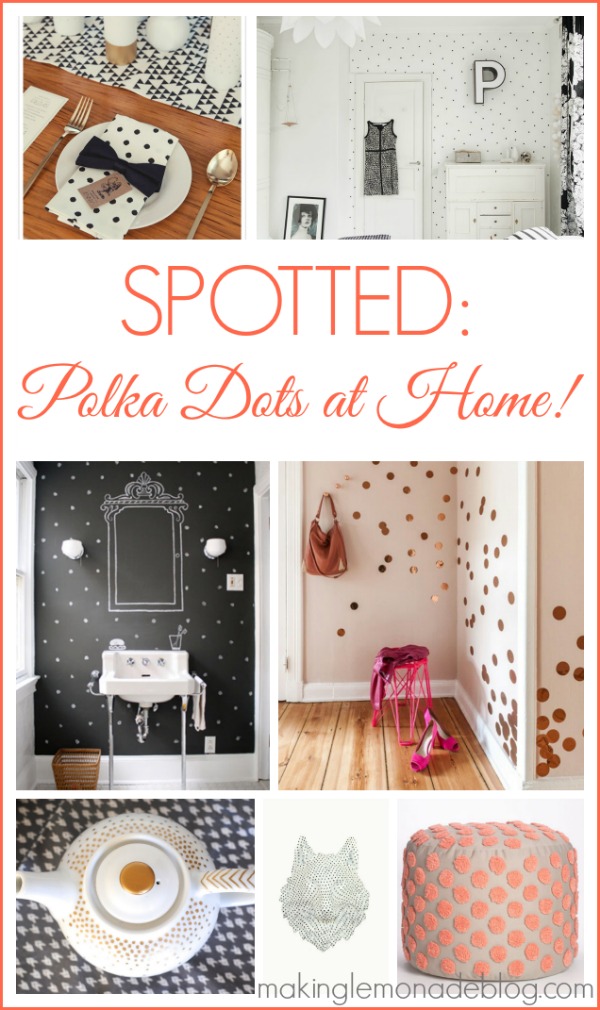 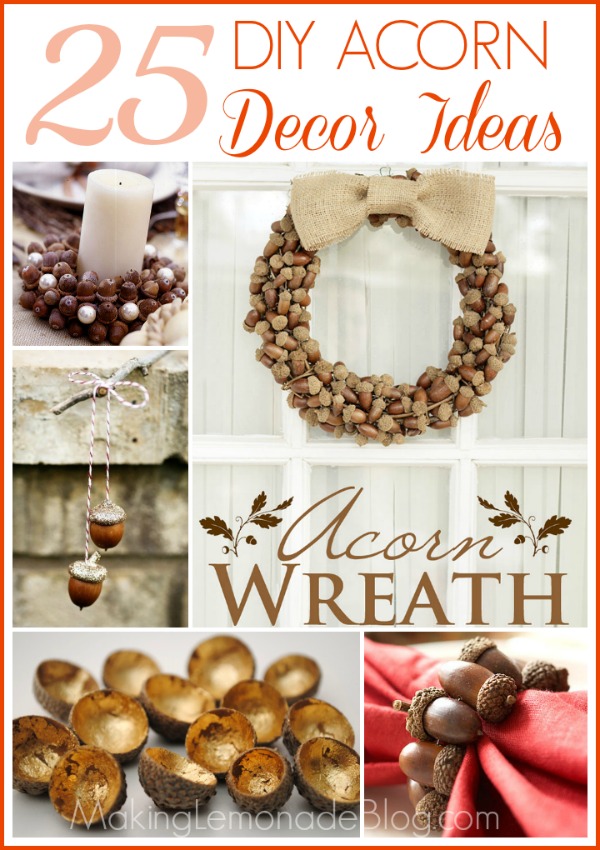 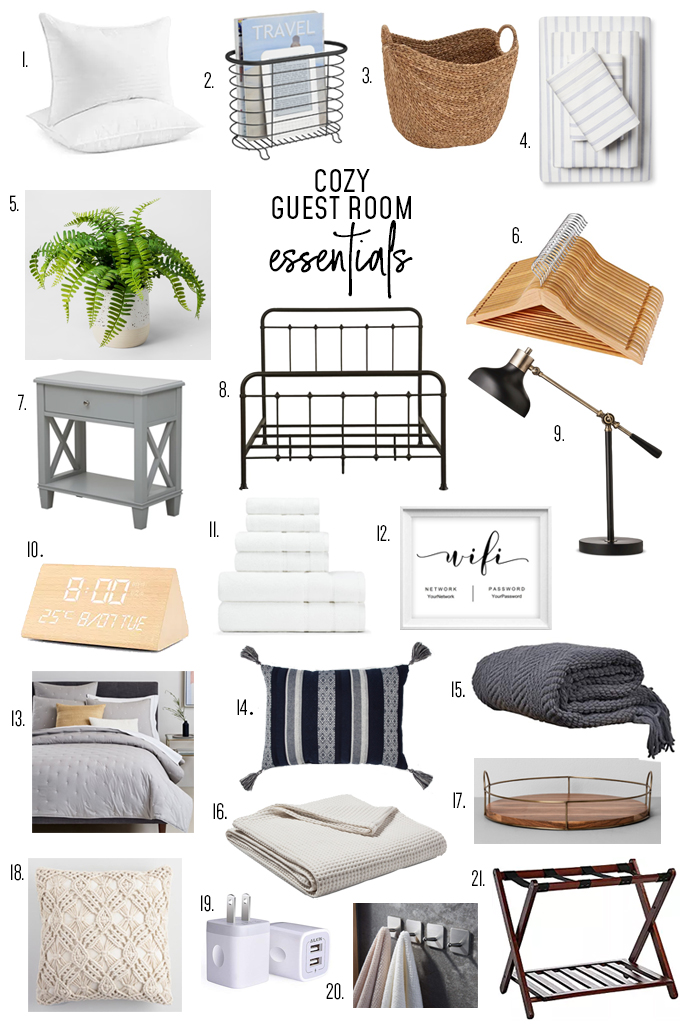