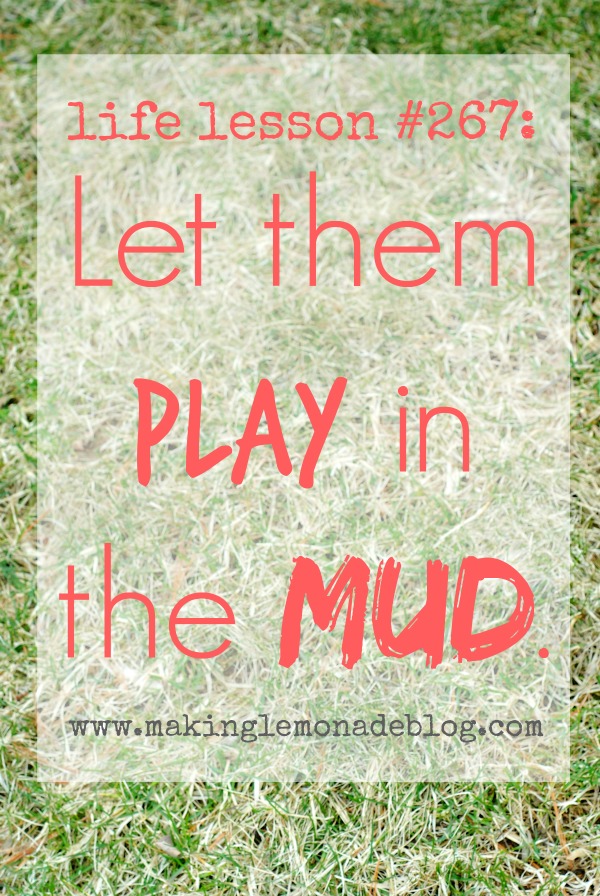 There’s sort of this never-ending conversation I have with myself in my head, which may certify me as crazy, but I’ll own that. On one side of the motherhood spectrum, I love a clean and organized home. As I sit here typing this, the kids are at school and all I can hear are the gentle swish of the dishwasher and flap of the clothes in the dryer. My floors are spotless, the crumbs are off the table, and for about .25 seconds I’m sitting in clean domestic bliss.

On the other hand, I was brought up in a creative home. We were allowed to make forts that encompassed entire rooms, had art supplies at the ready, and there were no clear rules about where to put our “stuff” with the exception of declaring the stairwell a ‘no dumping zone’. <——– yes, we thought this was hilarious and teased my mom mercilessly for using the word ‘dump’.

Imagine– even before the invention of Pinterest, there was still creativity. It’s because of this crazy notion of actually getting out there and doing stuff.

With spring comes mud. With mud, the inevitable tug of children’s hearts towards dirt, beckoning with a gravitational pull. Our yard is a mud field thanks to all the snow and subsequent sheets of rain, and therefore the kids want only to dive into the sloppy mess that inhabits our lawn.

And yesterday I let them. 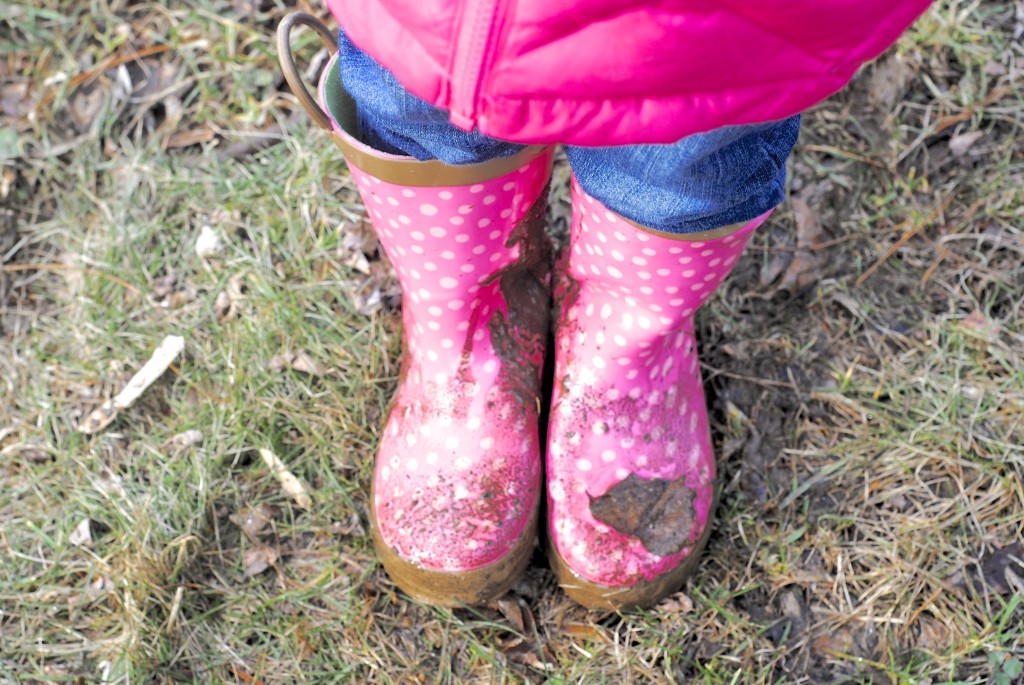 In my head there’s a Greek Chorus of veteran moms screaming at me: “but what about their CLOTHES?! they’ll be filthy! they’ll catch a disease from the dirt!” I wonder what the neighbors think: “there goes those Higgins kids again, where do they live, a BARNYARD? Does she even SUPERVISE them?”

But the squeals of laughter as my daughter slides down the slope, and the tears from my son the first time he fell and got dirty (but then wiped those tears away, and tried again, and worked through the mucky feeling into something bordering on delight) pushed out the other voices. (Truly, am I certifiable?)

don’t worry about the lawn, Bee’s just fast-tracking my plan to add a walkway here… 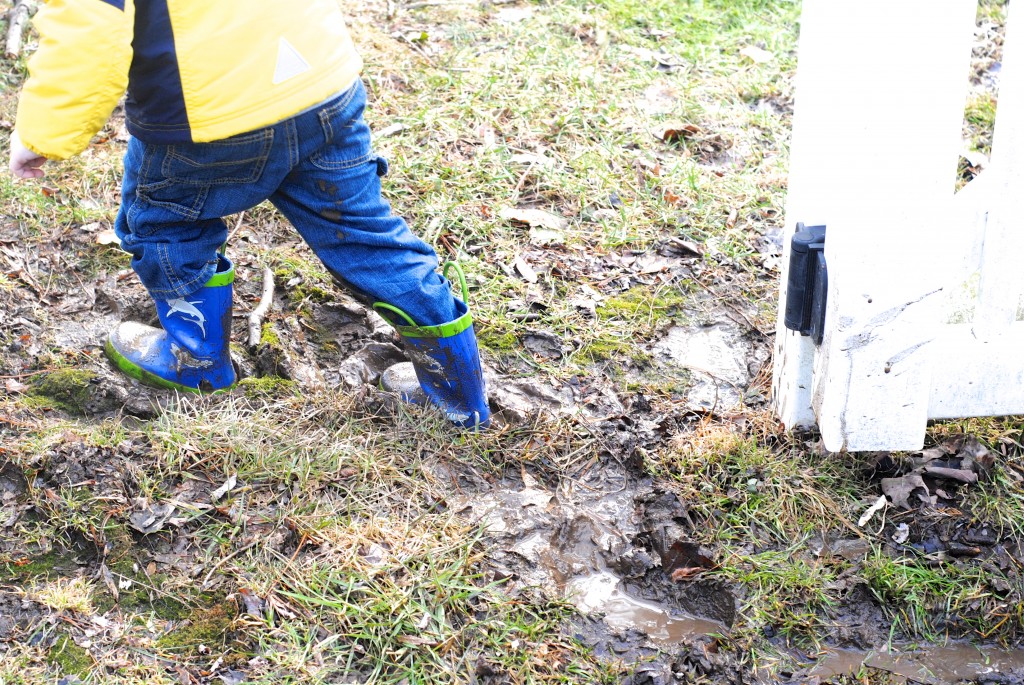 Sloppy, wet, and covered in muck from head to toe my kids eventually came back toward the house where we stripped off their clothes before they even got through the back door and put everything directly into a laundry basket. Pajamas pulled on, they could not stop giggling and begging to go back outside. My husband’s new shirt had a smear of mud across the front and my jeans had a distinct handprint across the thigh. Just as I was about to make a comment about being the worst mom in the world, my daughter looked at us and breathlessly declared it was THE BEST DAY EVER. 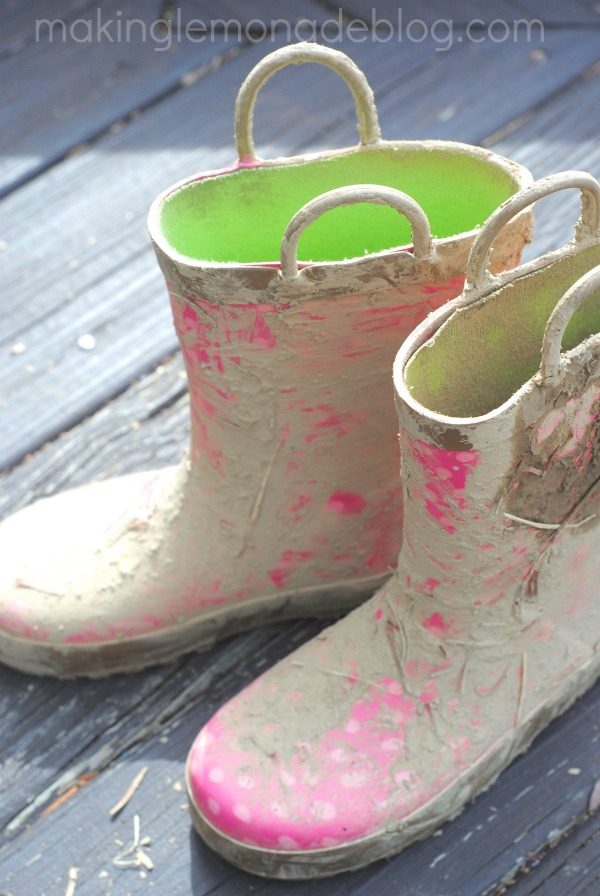 My husband and I locked eyes and said simultaneously: WORTH IT.

Sure, the laundry took some extra time and the boots will need to be sprayed with a hose but 1,000 projects on Pinterest can’t compete with letting my kids experience the freedom of playing in the mud. I’ve pinned dozens of sensory activities, but none compare with having your hands covered in mud and working through that feeling of ickiness. I could pin every painted handprint project in the world, but seeing my son purposely make wet footprints across the pavement so he could ‘track’ himself was priceless. 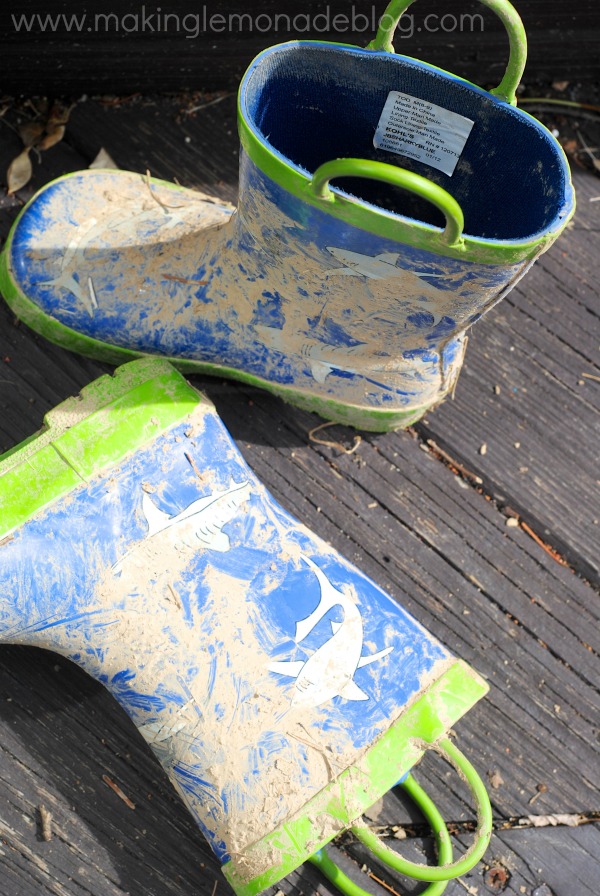 I suffer from ‘mom guilt’ on a daily (hourly?) basis. But from now on, my mantra will be: Let Them Play in the Mud. Of course, I won’t actually be able to let them literally play in the mud every day or else I’ll run out of detergent. And patience. But in life, it’s okay to have unscheduled time. Sure, I could lead them in an afternoon craft activity but they’ll probably learn more by playing independently and solving problems together in the playroom. Let. Them. Play. In. The. Mud.  In other words, let go. 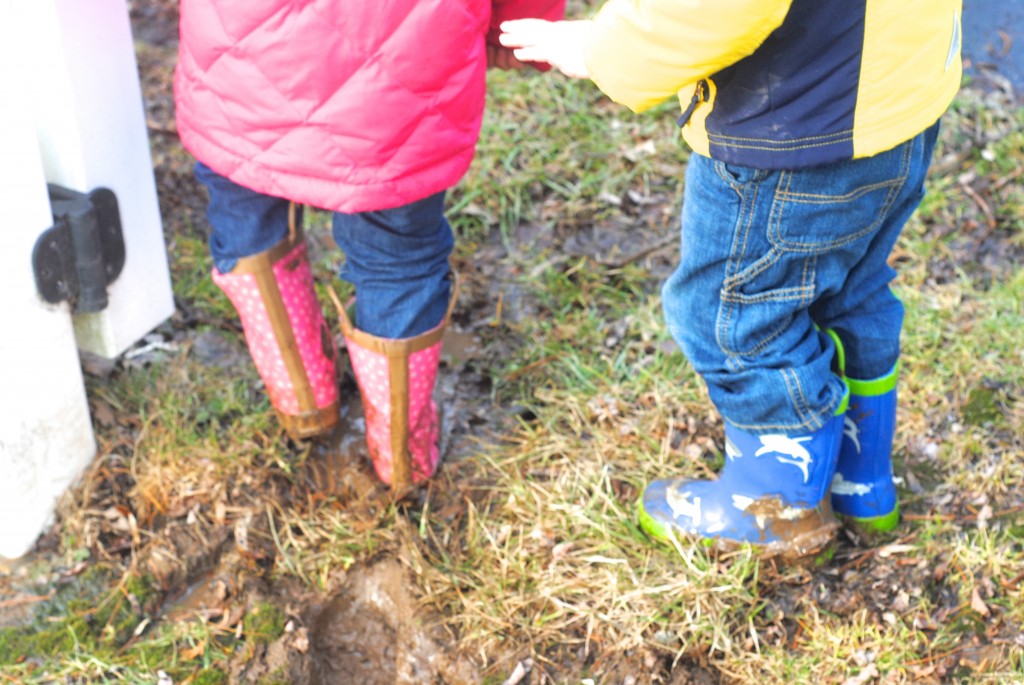 Childhood is inherently magical. I don’t need to create it. They’ll find it.

I should be working, or cleaning, or answering emails, or packing for my trip next week. Instead, I’m going to go play with some fabric and paint and see what happens. Mamas need their own mud-playing time, too.

When’s the last time you played in the proverbial mud? What’s your mud playing policy? 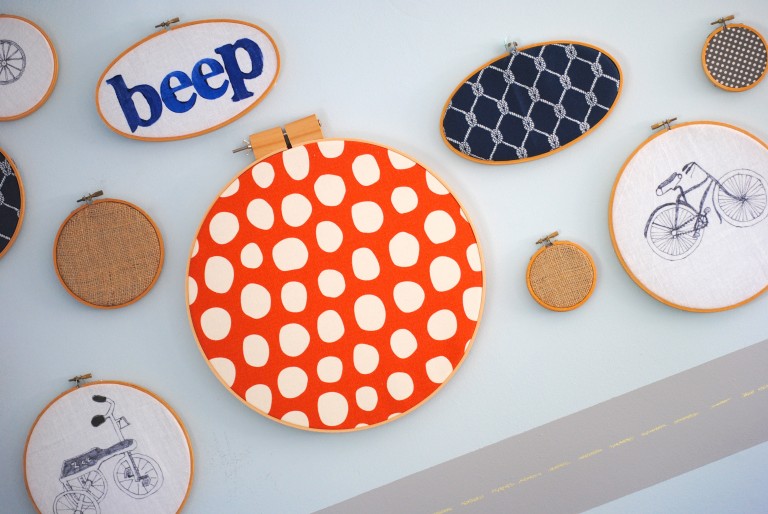